Review The Saddam Tapes, The Inner Workings of a Tyrant’s Regime 1978-2001 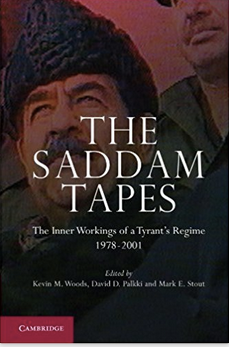 The Saddam Tapes, The Inner Workings of a Tyrant’s Regime 1978-2001 was the first book to use the wealth of captured documents and tapes seized after the 2003 invasion of Iraq. The book specifically focuses upon recordings of Saddam and his top advisers, usually at meetings of the Revolutionary Command Council or cabinet. Those tapes both confirm and dispel many of the stereotypes built up about Saddam over all the years he was in power. For example, he considered himself an expert on all kinds of affairs even if he didn't really know about them, he believed in conspiracies about the United States and Jews-Israel, but he was not a madman and he was not surrounded by a bunch of yes men. While his inner circle did not always pass along bad news there was actually lively debate and long discussions on most issues. While the transcripts do not all invoke the same interest, they do provide a first hand and inside account of Saddam’s government.


The book covers 8 topics: relations with the U.S. the Arab world and Israel, the Iran-Iraq War, the Gulf War, weapons of mass destruction and nuclear weapons, United Nations inspectors and sanctions, and the defection of Hussein Kamal, Saddam’s son in law. Each section comes with a brief intro, and then a series of transcripts of discussions on each issue. Not all of them are engaging, but there are a lot of good morsels contained within them.

For one, Saddam never trusted the United States. Even when the Reagan administration decided to re-engage with Baghdad during the Iran-Iraq War, Saddam believed it was helping Iran. That was because the Americans had previous backed Iran, Israel and the Kurds in the 1970s, and he thought the U.S. was behind the Iranian Revolution. His fears were confirmed by the Iran-Contra Affair. These ideas continued through the Gulf War to the U.N. sanctions and U.N. weapons inspectors. At the same time, the Iraqi inner circle had a hard time understanding Washington politics. They would discuss things like elections and White House decision making, but had no real idea how they affected U.S. foreign policy. For example, Tariq Aziz speculated that the 1st President Bush would start another war with Iraq to win a second term.

The regime saw Israel as a constant threat and held anti-Semitic views. Saddam believe that the infamous Protocols of Zion were real and in the mid-1990s there were several meetings where he told his advisers to read and study the Protocols so they could understand Israel and how the Jewish mind worked. Saddam asked Iraqi intelligence to find out whether U.N. Secretary General Boutros Bourtros-Ghali had a Jewish wife and mother, and one of his aides told him that because New York City was Jewish and the U.N.’s Javier Perez de Cuella lived there he would fall under Zionist influence. Saddam saw weapons of mass destruction and nuclear weapons as the ultimate deterrent to Israel. In the 1990s he claimed that Iraq’s WMD had created an umbrella to protect all the Arab capitals from an Israeli attack. He also thought that if Iraq gained a nuclear bomb, it could lead a successful war against Israel.

There are also insights into the invasion of Kuwait-Gulf War-1991 uprising. In one meeting of the Baath Party in 1990 Izzat al-Duri said that Kuwait was conspiring against Iraq, and that was part of a larger conspiracy of Israel to destroy the country. After the invasion, Saddam ordered his forces to loot the entire country and kill and maim any Kuwaiti that stood in their way. Later after he was captured by the Americans and interrogated by the FBI he would deny that he gave any such instructions. Saddam never took the U.S.-led Coalition threat seriously. During one discussion, he said that all the U.S. would do was bomb Iraq and that would mean little. After the Gulf War, he considered himself the victor because he remained in power and bragged that Iraq had faced so many countries in a war and survived. He claimed that Iraq’s fighting spirit defeated the Americans, which was a theme he would bring up again when the 2003 invasion came. Finally, the 1991 uprising was seen as a combination of the low morale of the Iraqi forces after the Gulf War, and Iran’s plotting.

Finally, the tapes show that Iraq destroyed its WMD stockpiles and stopped its programs and its nuclear effort in 1991, but never came fully clean about it to the U.N. inspectors. There were meetings where Saddam and his staff discussed how they would not initially declare their biological weapons program, how Iraq sought to create crises with the U.N. to try to negotiate better terms, and how they hoped to use France and Russia to end the inspections and sanctions. That was because it feared that the inspectors were working for the United States, and Washington would never agree to ending sanctions no matter what Baghdad said because it wanted regime change. This meant the U.N. could never verify Iraq’s disarmament. That would come to haunt it as that was part of the main argument of the Bush administration to invade and overthrow Saddam in 2003. It’s deceptions in the 90s were why the White House didn’t trust the new round of inspections that started in 2002 as well.

The major issue with the book is that while it provides all this information, the reader has to go through dozens and dozens of pages to find it. There are some sections that are much better than others, and some, like the final chapter on the defection of Hussein Kamal that includes talk about him being mentally unstable and various officials claiming they never trusted him, which should have not been included. All the talk shows that Saddam was not an autocrat who made all his decisions by himself, but rather his aides, ministers, etc. contributed to discussions and even disagreed with him at times. On the other hand, it’s not always fun to read through all of it. Overall, that means The Saddam Tapes is for the real Iraq enthusiasts, analysts and historians rather than the general reader.