Security In Iraq Largely Unchanged In May 2018


Security didn’t change much from April to May 2018. The number of incidents was roughly the same with 204 in April and 218 in May. There were 486 deaths in April, but 246 were bodies found leaving 240 violent deaths for the month. In May, there were a total of 298 deaths, but 25 of those were corpses discovered leaving 273 killed during the month. 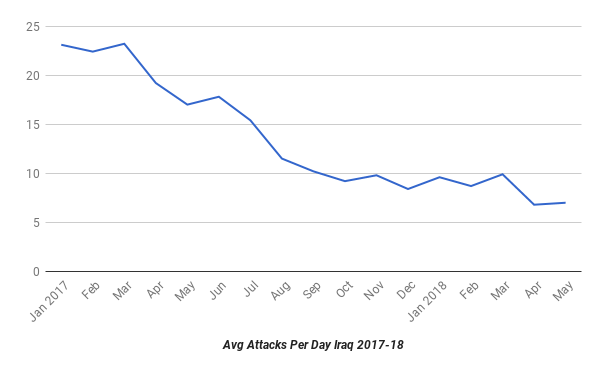 Violence continued its sharp decline in Anbar with incidents going from 15 in April to just 9 in May. There was a slight increase in attacks from January to March, but that has gone down to probably the lowest level since 2003 to an average of just 0.2 per day. 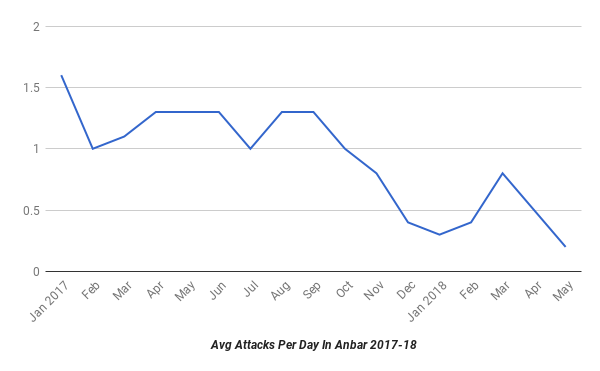 Diyala saw a decline from 44 incidents in April to 38 in May. Attacks there have constantly fluctuated up and down for over a year now. The province is one of the main areas where the Islamic State is rebuilding, and the types of attacks have changed. For example, there was a mortar attack upon a checkpoint and then several policemen were kidnapped by insurgents. Grenades were thrown at the house of the brother of a Federal Police commander. 2 suicide bomber were killed, while another set off his device while assaulting a village in the Khanaqin district in the northeast. The militants also burned crops in two towns. These were all attempts to re-assert the group’s control over rural areas in the province, and intimidate the security forces, tactics the group has used for years. They are being repeated in other provinces as well. 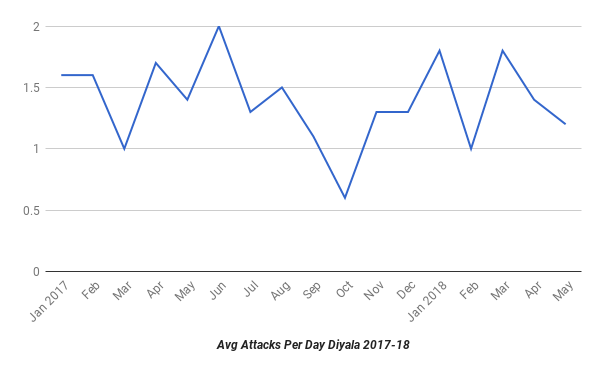 The situation in Ninewa was largely unchanged. There was an average of 0.8 incidents per day in April going down to 0.6 per day in May. At the end of the month there were six confrontations with insurgents leading to gun battles, but the real news was the huge number of bodies still being dug out of the Old City district in west Mosul after officials said that job was done. Because the authorities are not checking the IDs of the corpses they have not disclosed how many were insurgents and how many were civilians, so most of them have not been added to the monthly body counts. That was also the cause of the large difference in casualties from 279 in April to 65 in May. In April, most of the bodies excavated were said to be civilians, while little information was given about those in May. 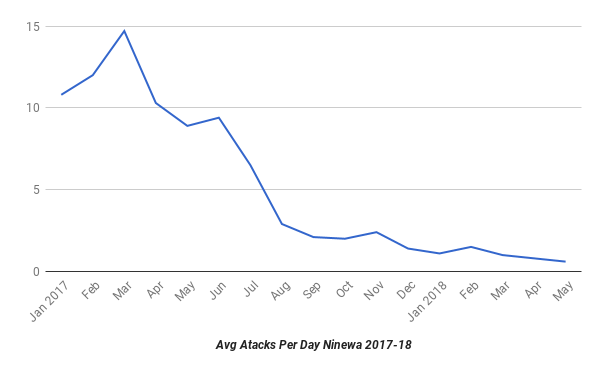 Baghdad witnessed an increase in casualties due to several large attacks. Islamic State fighters went into a town in Tarmiya in the north killing 21 and wounding 10. Two weeks later a suicide bomber hit a funeral in that same district leaving 8 killed and 31 injured. The week after that another suicide bomber blew up a café with 7 dead and 16 wounded. That was the reason why casualties went from 51 in April to 146 in May. 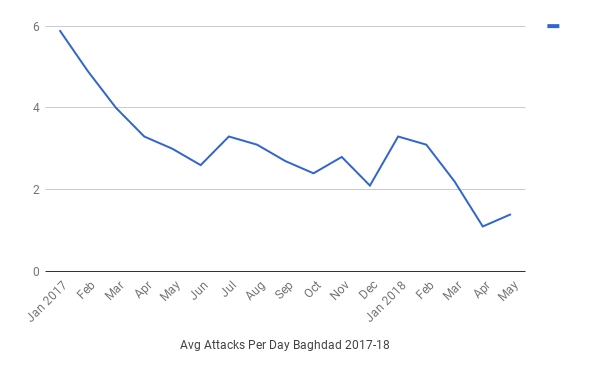 Kirkuk, 36 incidents in April and 48 in May, and Salahaddin 18 in April and 30 in May also saw more insurgent activity. There was a huge number of attacks during the week of voting in Kirkuk, the most seen in years. Towards the end of the month 8 suicide bombers were intercepted by the security forces, but 4 were able to blow themselves up. IS also burnt wheat fields in a town. In Salahaddin there were 11 gun battles with insurgents, 7 suicide bombers were killed in two separate incidents, there was one successful suicide bombing, and attack upon a town and a Federal Police base. Like Diyala these were all attempts by IS to make a comeback. 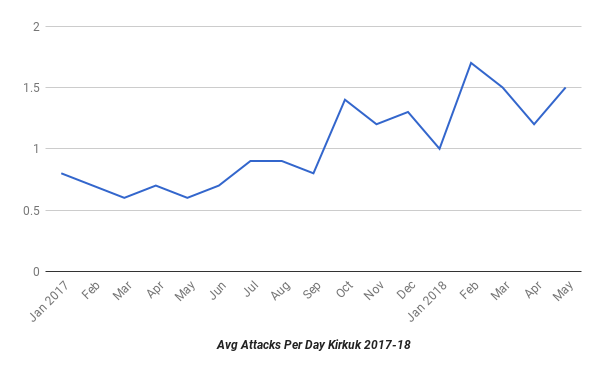 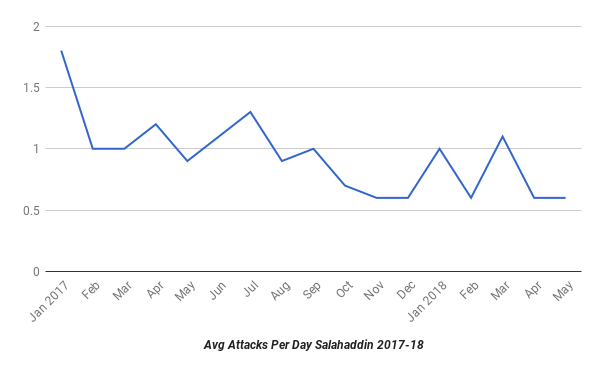 Violence By Province May 2018

Al Ghad Press, "The brother of the Director of the Office of the Federal Police Commander was injured after being targeted by hand grenades in Diyala," 5/4/18
- "The martyrdom of an intelligence officer from Ghazaliya in explosion in Shula," 5/24/18

Iraq Newspaper, "Dash Terrorists Assassinate A Village Mukhtar In Riyadh, Captures Fighters In Kirkuk And Killed Them In Khanaqin," 5/24/18
- "Foiled Two Attacks By Daesh Terrorists South Of Mosul," 5/26/18
- "A Suicide Bomber Kills An Explosive Expert In Dhuluiya And Detonation Of A Land Cruiser From The Popular Crowd In Samarra," 5/21/18

Al Maalomah, "The popular crowd repulsed a move by Daesh near Baiji," 5/29/18

NINA, "Daesh burned fields for the wheat northwest of Kirkuk," 5/24/18
- "The Security forces repulsed an attack to Daesh and kill a terrorist northwest of Mosul," 5/23/18

Rudaw, "8 killed in clashes between government forces and Daesh gunmen south of Mosul," 5/22/18

Sotaliraq, "One soldier was killed and another was wounded in a clash with Daesh northwest of Mosul," 5/26/18

Al Sumaria, "Daash attacking the Alas oil field and clashing with the security forces," 5/31/18
- "Diyala announces the killing of two militants who were planning on targeting an election center in Baquba," 5/12/18