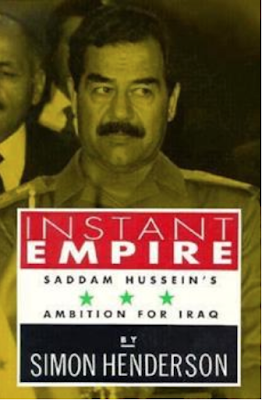 Instant Empire, Saddam Hussein’s Ambition For Iraq by journalist Simon Henderson was one of a number of books released around the time of the Gulf War. It is rather similar to many of them covering the rise of Saddam Hussein, the Iran-Iraq War, who armed Baghdad and its various weapons programs. What is different is that the first third is a history of Iraq that weaves Saddam into it providing a fuller picture of the country.

The first part of the book gives an interesting history of Iraq and effectively connects it to Saddam. For instance, it starts off with ancient history such as Nebuchadnezzar and Babylon and explains how Saddam constantly referenced that past. It goes through the monarchy that was put in power by the English after World War I and how Saddam considered that a period of foreign imperialist rule. Then the Qasim coup which overthrew the old order and Saddam’s small role in an attempted assassination of the new ruler which Saddam turned into a bit of folklore in the cult of personality created around him. Most books of this time focused exclusively upon Saddam so this was a big difference. It also gave the reader a more complete view of Iraq instead of just having the Baathist period.

The rest of Instant Empire is just like other books of this time. There’s a chapter on Saddam’s rise from obscurity within the Baath Party to be the leader of Iraq. It has him getting rid of his rivals and constantly shuffling his inner circle to make sure that there were no threats to his rule. There’s another chapter on Iraq’s WMD and nuclear programs. The one after that is about the supergun Saddam tried to build. The following three are on all the different countries that armed Iraq from the USSR and France which were the two main arms supplies to the German companies that helped develop chemical facilities. There’s one chapter on the British journalist Farzad Bazoft who was executed by the regime for espionage. Henderson believes he was a spy largely based upon Iraqi claims something that seems completely ridiculous because you could never trust a government like that to tell the truth on such a matter. It also misses how much the Bush administration wanted good relations with Iraq believing it could be turned into an American ally in the Middle East. Instead, Henderson portrays it as a contentious relationship due to Iraq’s poor human rights record and attempts to develop a nuclear bomb. Besides that the other sections are done well and document the ruthlessness of Saddam and how the world was willing to help Iraq due to its vast oil wealth even when it could hardly pay because its coffers were dry during the Iran-Iraq War.

Instant Empire, Saddam Hussein’s Ambition For Iraq is a product of its time. Henderson said that he was researching Iraq before the invasion of Kuwait having been a long time Middle East reporter, and that the Gulf War provided him a contract to publish his work. It’s amazing that there are other books from this period that cover almost all the same material. It’s as if the publishing houses shared a list of what they wanted to know as background to the war with Iraq in 1991 and those that could meet it got a deal. The history section makes Henderson’s work stand out, but then things like the Bazoft case tarnish it. Overall, there are others that do a better job.