Review Iraq Since 1958, From Revolution To Dictatorship 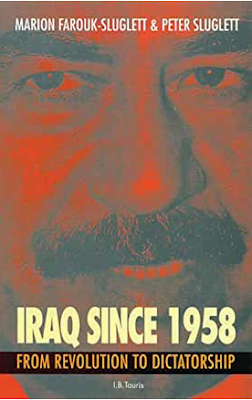 Iraq Since 1958, From Revolution To Dictatorship by Marion Farouk-Sluglett and Peter Sluglett is one of the seminal Iraqi History books in English. It covers the history of Iraq from the monarchy to Saddam Hussein’s rule in the 1990s. The Slugletts main focus is on the governments that came after the 1958 coup and how they struggled to stay in power because they lacked a popular base.

The Slugletts argue that the problems with the Iraqi state and elite rose out of the country that was created by the British after World War I. Iraq was a top-down creation with the elite not relying upon the people to rule but rather support from London and their control over the military and police. That never changed after the 1958 coup which deposed the English installed monarchy or the two coups that followed. Those were launched by a small group of conspirators within the military. They lacked a popular following and their base was within the officer corps. The massive growth in oil revenues also made the elite independent of the populace because they didn’t need them for taxes to fund the state. The governments were even more fragile because they were split ideologically and more importantly according to the Slugletts by personal rivalries. If a group was able to build up a following within the military they could launch another coup and there were various attempts throughout Iraqi history. The authors provide a convincing thesis with plenty of examples from the post-1958 regimes.

The book argues that the Baath were the first to overcome this dilemma by constantly shifting alliances and expanding the party throughout Iraqi society. Initially the Baath were just like previous governments that came to power after a coup with a fragile base. There were even splits within the Baath between the civilian and military leaders. President Ahmed Hassan al-Bakr and his lieutenant and eventual successor Saddam Hussein constantly changed coalitions within the Baath party itself, first relying upon relatives and allies from the Tikrit area where they originated from. Those that fell out of favor were removed and often killed. They took over the military by replacing officers and putting Baathist commissars throughout the ranks. It also made an alliance with the Soviet Union and vastly expanded the welfare state using oil wealth to rob its greatest rival the Iraqi Communist Party of a platform and even enticed them into a National Front even though the Baath had massacred Communists after the 1963 coup and continued to imprison its followers. The Baath then took over all the popular organizations like women’s groups and unions which the Communists had dominated. Eventually there were no organizations that could operate unless they were under government control. The president also promised autonomy to the Kurds who were impossible to defeat militarily. Bakr never had any intention of following through with the deals he made but he dragged out talks so long that the Kurds were not an issue for a few years. Eventually when they went back to war with Baghdad Bakr signed an agreement with Iran in 1975 who the Kurds had becoming completely dependent upon for weapons. Without Tehran’s support the Kurdish revolt completely collapsed. The Baath turned out to be the first since 1958 to figure out the puzzle of fomenting a coup and staying in power by successfully dealing with its rivals and expanding its base. It didn’t just use repression either as it offered plenty of carrots as well.

Iraq Since 1958 deserves the reputation that it has. It is definitely one of the better Iraq history books out there. It not only deals with the political conflicts but has some in depth chapters on the economy as well such as how oil came to dominate the country, the expanding role of the state and the private sector. It has a strong thesis about political instability within the country with plenty of examples to prove it. The Slugletts’ work stands out from others because of its strong point of view.