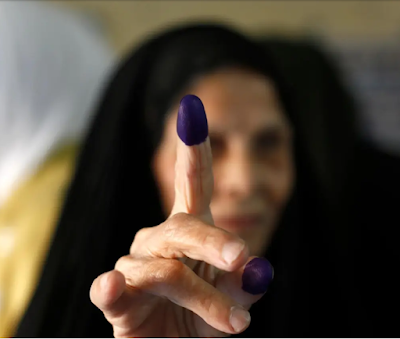 (AP)
Sunday October 10 Iraqis will go to the polls once again to select a new parliament. Moqtada al-Sadr’s Sairoon and the Fatah list led by Badr’s Haid Amiri are likely to do the best. That’s the result of two factors. First, the new election districts favor parties that can bring out voters and have the money to run multiple candidates across the country, and turnout is expected to be low.

The new election law favors parties that have a national following and lots of money. Before each province was its own district, but now there are 83. That means parties that can get out the vote across Iraq will have an advantage. Lists also had to pay 10 million dinars per candidate which benefits the richer parties that can afford to put up more candidates. The new rules favor the Sadrists and Fatah. Moqtada al-Sadr for instance is the only leader with a mass following who can mobilize voters across many districts. Fatah represents many of the Hashd groups who can rely upon not only their fighters but their relatives as well. Their votes will likely count more as well as the voter turnout is expected to be the lowest since elections started in 2005 due to widespread dissatisfaction with the political class and a boycott by members of the protest movement. That’s the reason why Sadr championed the new election legislation because it would benefit him.

Of course gaining the most seats in parliament is only the first step in a dragged out process to form a government. It usually takes months of backroom dealing to determine which party gets which ministry and office because that’s what elections are really about, splitting up the spoils. None of Iraq’s major parties really believe in democracy. They only want to hold onto power and enrich themselves by exploiting the state. They only turn to the voters every four years and rely upon massive fraud on top of that to win. Losing legitimacy with the public and having lower and lower voter turnout means little to them.

Hasan, Harith, “Why the Iraq elections will not prevent the next political crisis,” 10/8/21