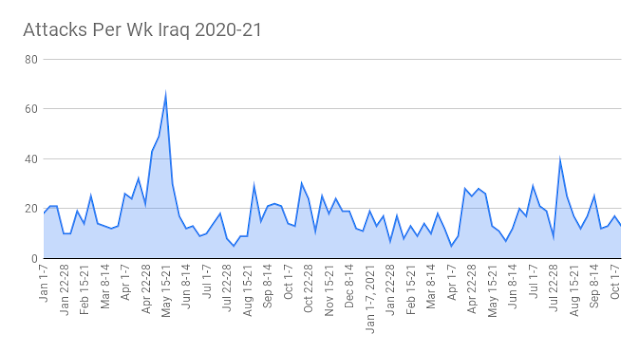 Security remained the same during the second week of October. Islamic State attacks remained in the teens. There was also an attack by a pro-Iran group which has been rare since the end of September.

They led to four deaths, 2 civilians and 2 members of the Iraqi Security Forces (ISF), and 13 wounded, 1 Hashd al-Shaabi, 5 ISF, 7 civilians. Salahaddin had the most casualties with 6. 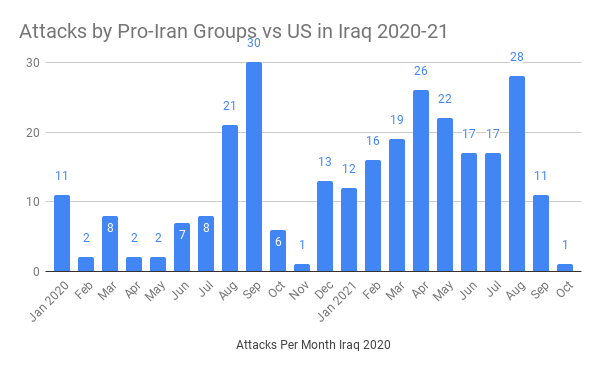 There was one incident by pro-Iran groups when a supply convoy working for the U.S. was hit with an IED in Basra. The last such incident was back in September 25. These factions are carrying out these operations at the behest of Iran so there must have been a message to hold off perhaps because of the Iraqi elections.

In Baghdad a bomb was set off outside the house of a Hashd commander in Shula in the north that wounded 2 people. IS reactivated its cell in Tarmiya in the outer north of the province but it has been quiet over the last few weeks due to security sweeps by the government.

There were just two incidents in Diyala, two shootings in the Muqdadiya district in the center.  One was at a voting center obviously meant as an attempt to intimidate voters before the election. Diyala is usually the most violent part of the country, but this week was different.

Kirkuk had the most incidents with 5. That included mortar fire on a voting center and a sniper firing at another. At the end of the week IS men stormed into a house looking for three oil police who were not at home. The insurgents have major bases in the south of the governorate but attacks wildly fluctuate there week to week.

Two checkpoints were attacked and a town was hit by mortar fire during the week in Ninewa. These are the norms in the province. IS usually just focuses upon keeping people and the security forces out of its smuggling routes and camps.

The Baiji district saw two attacks during the week with a sound bomb and a mortar incident. Like Kirkuk, Salahaddin has IS camps but incidents go up and down with each week.

- "Targeting the house of a brigade commander in the Popular Mobilization with a sound bomb in Baghdad," 10/13/21

Shafaq News, "An explosion targets a support convoy for the international coalition in the far south of Iraq," 10/13/21

- "Mortar shelling north Salahaddin and the closure of an election center due to an armed fight in Diyala," 10/10/21