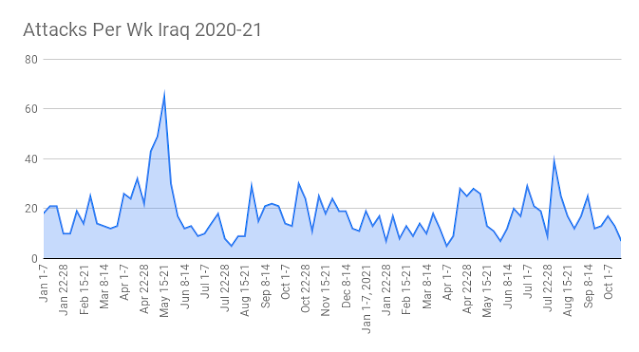 Violence declined in Iraq during the third week of October. Islamic State attacks were down to single digits. On the other hand pro-Iran groups are active once again.

Those led to 3 dead civilians and 2 wounded from the Iraqi Security Forces (ISF). 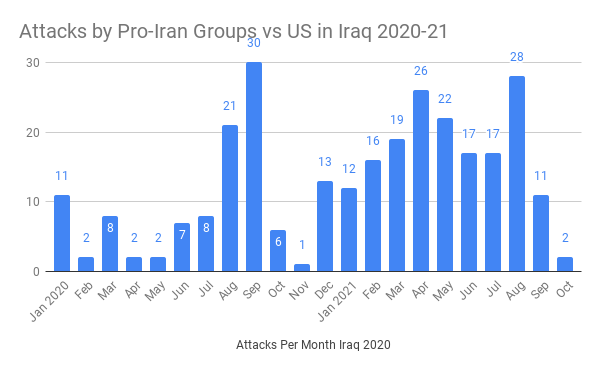 2 incidents were by pro-Iran groups. They hit a convoy working for the United States with an IED in Dhi Qar. 3 more bombs were discovered and dismantled in Babil. With the elections over it appears that these factions are back to work.

In western Anbar the insurgents attacked a checkpoint in the Rutba district. A Hashd al-Shaabi base was hit by mortar fire in Latifiya in southern Baghdad. IS restarted operations in the north, but occasionally operates in the south as well. Diyala is usually the most violent province in the country but attacks have gone from 7 the first week of October to 2 the next to just one this week when a checkpoint was shot at that wounded 2 policemen. The militants burned three cars in a town and a man’s body was discovered after he’d been kidnapped both in the Daquq district in southern Kirkuk. That area has IS bases but incidents wildly fluctuate week to week. In Ninewa two men were shot down and killed.

IS launched two offensives this year as usual one for Ramadan and the other during the summer. During the winter attacks decrease and that’s what’s happening in October.

- "A Convoy Of Logistical Support For The Int'l Coalition Targeted With An IED In Dhi Qar," 10/19/21

- "Two policemen were injured and a vehicle destroyed in an ISIS attack on a security point south of Baquba," 10/18/21