Review No True Glory, A Frontline Account of the Battle for Fallujah 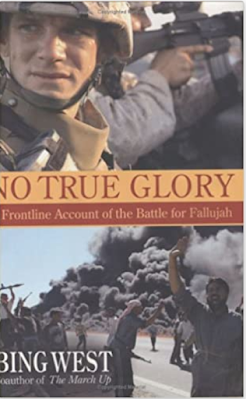 No True Glory, A Frontline Account of the Battle for Fallujah by Bing West is a harrowing tale of the Marines and soldiers that fought in the two Battles of Fallujah in 2004. It takes you into the squads and companies that went house to house along with all the political machinations that surrounded the operation. While it’s a great history of the campaign to retake Fallujah it is in no way representative of what the Iraq War was like.

An understanding of the two Battles of Fallujah is impossible without dealing with politics. West begins with President Bush’s emotional response to the murder of a group of Blackwater contractors in Fallujah which led him to order an assault upon the city. The Marines who had just returned to Iraq objected because they had a long term plan to secure Fallujah and Anbar province. They were overruled by Defense Secretary Donald Rumsfeld, Central Command head General John Abizaid and Coalition Provisional Authority leader Paul Bremer who advised Bush to attack the city. That led to the first Battle of Fallujah at the start of April 2004.

Abizaid and Bremer would then talk Bush out of continuing the operation because of the political fallout it was creating within Iraq. Several members of the Iraqi Governing Council were talking about resigning in protest over the civilian casualties going on in the city. This was fueled by reports on Al Jazeera that backed the insurgents and reported that Fallujah was being destroyed. That led to a ceasefire. West writes that this was a mistake because the Marines could have taken the city and Al Jazeera’s coverage was biased. The insurgents also claimed they won as a result. Overall this setback was due to the Americans not planning for the battle. They hastily ordered an attack and didn’t prepare the ground beforehand by discussing the matter with the Iraqi Governing Council and setting up their own information campaign to put out their version of events. They eventually did that in November when the second battle began. These issues would be repeated throughout the first half of the American occupation of Iraq.

West blames the lack of a unified command for these major faults. Paul Bremer was the civilian head in Iraq who worked alongside the U.S. military under CENTCOM head General Abizaid and Iraq commander General Ricardo Sanchez. National Security Adviser Condoleezza Rice also sent a special envoy to the country Robert Blackwill. Bremer and Sanchez did not like each other and did not work together, and neither did the other top figures. The White House therefore was getting advice from several different voices instead of just one. This would never be fixed although the civilian and military sides did cooperate much better later on.

The vast majority of No True Glory consists of accounts of the fighting. There are several memorable scenes especially during the second battle where insurgents were holed up inside houses and the Marines took heavy casualties to clear them out. This was the inspiration for West writing the book to begin with, to remember the sacrifices of the troops.

Bing West does a great job documenting both the politics and the fighting involved in the two Battles of Fallujah. His critique of the shortcomings of the U.S. occupation have been voiced by others. He barely mentions it but the operation was not indicative of what the war in Iraq was like. It was not about major assaults upon cities but rather carrying out patrols, looking for IEDs, trying to set up reconstruction projects, rebuilding the Iraqi security forces, trying to win over the Iraqi population, etc. There’s only one very short scene where this is portrayed and it did not give a good impression of the U.S. troops as they humiliated Iraqis over and over doing searches. This was because the American military was completely unprepared for an occupation. Its soldiers and Marines were trained for combat not nation building which was what they ended up doing and doing very badly. It was the root cause for the two battles to take Fallujah and should have been emphasized more.