Review when baghdad ruled the muslin world, the rise and fall of islam’s greatest dynasty 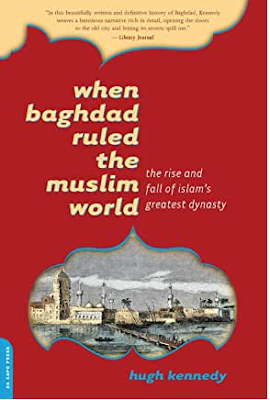 Hugh Kennedy takes an unconventional approach to telling the history of the Abbasid caliphate in when baghdad ruled the muslim world, the rise and fall of islam’s greatest dynasty. He was inspired by the poems and stories that are the source material for historians to study this time period. He therefore wrote a narrative about the empire rather than a straight history. It proved to be a very approachable book on the Abbasids.

Most of when baghdad ruled the muslim world is told in chronological order with chapters thrown in about court culture. That includes poetry which was based around praising high officials and love stories. Kennedy goes into some of the famous writers of the time. Another time he writes about how the caliphs eventually stopped marrying and just fathered a number of children with slave girls and princesses with each male offspring gaining a following who would promote them as the next caliph. There’s also mention of how the position of Queen Mother arose who would also garner an entourage, palaces and major wealth. These sections provide interludes from the rest of the book which focuses upon the caliphs, the military and intrigue.

Kennedy emphasizes two important points about the Abbasids the first of which was that its beginnings were along the periphery of the Umayyad empire. In Merv which is in present day Turkmenistan people began calling for the restoration of the Prophet Mohammad’s family to power. They didn’t go to his direct descendants however. Rather they went to Humayma in Jordan and contacted his uncle’s family. The first caliph of the Abbasids Saffah was the son of the Prophet’s uncle. It can be said that dissent is easiest on the outskirts rather than the center of power because there is not as much direct control. That was the case with the emergence of the Abbasids. It also meant that the Abbasids didn’t have much support at first and had to consolidate their hold which involved getting rid of their rivals and lot of bloodletting. Kennedy writes that one caliph was even said to have killed as many direct relatives of the Prophet as he could find to ensure no one challenged Abbasid rule.

Second, the author talks about the Caliph Mutasim’s decision to build a private army of Turks which eventually led to the dynasty’s fall. Mutasim’s idea was to have soldiers directly loyal to him and no one else. The Turks were outsiders and many weren’t even Muslims. They would eventually become a force of their own controlling the military and many of the top government positions. They got rid of caliphs they didn’t like and revolted and looted when the Abbasids ran into financial trouble and couldn’t pay them. They ended up undermining the empire from within and led to its eventual decline. The last caliphs were little more than figureheads supported by one faction of Turks or another. Kennedy has great stories of these last rulers and how they came and went one after another due to the machinations of the Turks.

Overall, when baghdad ruled the muslim world, the rise and fall of islam’s greatest dynasty is a very engaging book. The story writing style brought you into the world of the Abbasid court, its major figures, their strengths and weaknesses which led to the rise and fall of the empire. It was especially interesting because the history was full of plots, coups and backstabbing. There’s also chapters on court culture so not everything is about this caliph or advisor doing this and that. It comes highly recommended.