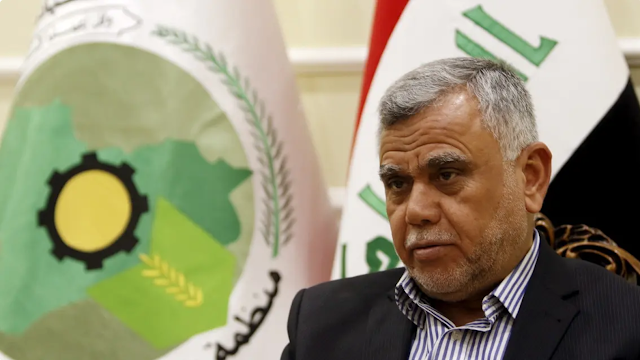 Amiri's Fatah is one of several parties rejecting the early returns in Oct's election (Reuters)
Several of Iraq’s major parties had poor showings in Sunday’s vote and they are not happy. Many of them are claiming fraud and there were some protests as a result.

Fatah, the Islamic Party, the Patriotic Union of Kurdistan (PUK) and others rejected the early election results. Hadi Amiri the head of Fatah and Badr went on Al-Aahd TV and said that he would not accept his party only winning 14 seats. The PUK claimed there was cheating in Irbil. A losing candidate from Fatah threatened to cut roads in Basra while another from that governorate had a demonstration in front of the Election Commission office. A third candidate from the National State Forces had his followers block the highway to Baghdad in Diyala.

Every time there are elections there are complaints about fraud. Usually the parties just go to the election officials. The difference this year is that some major players did very bad and can’t accept it. That has led to the scattered demonstrations. The real problem is if some decide to use the plethora of weapons in the country to threaten the government if they do not gain more seats. That could lead to a crisis, but hopefully this will be contained and just consist of a few protests.

NINA, “Demonstration In Basra To Protest Against Not Counting Their Votes In Favor Of Candidate Muzahim al-Tamimi,” 10/12/21

- “A Losing Candidate From Basra Threatens To Cut Off The Roads Leading To The Ports If The IHEC Does Not Recount His Votes,” 10/12/21

Al Noor, “The Islamic Party rejects the election results and confirms their falsification and the mistake of recognizing them,” 10/12/21