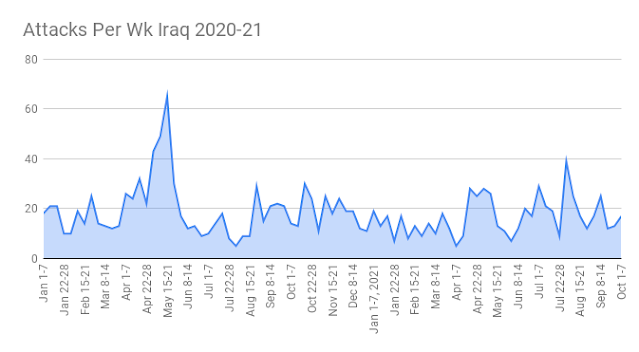 Violence in Iraq has remained steady for the last month. Attacks by the Islamic State have been in the teens each week. The major change at the start of October was there were no incidents by pro-Iran groups which tapered off at the end of September.

There were a total of 17 security incidents reported in the media from October 1-7. That was the same number as the last full week of September and similar to the week before that when there were 13 incidents.

That led to 11 dead, 3 members of the Iraqi Security Forces (ISF) and 8 civilians, and 22 wounded, 2 Hashd al-Shaabi, 8 ISF and 12 civilians. Salahaddin was the only province with casualties in double figures with 18.

Anbar and Ninewa are logistics hubs for the insurgency and see few incidents. There was a change in Anbar however when a suicide car bomb was blown up while moving down a road in Ramadi. The last such incident was a truck bomb in August. In Ninewa an IED went off in Tal Afar in western Ninewa that wounded 2 soldiers. That is more of the norm in the two governorates as IS is only interested in keeping people and the security forces away from their transit and smuggling areas.

After a lull in violence there was an incident in Baghdad’s Tarmiya district in the north. A man was beheaded and his car burned. This looks like an act of intimidation either to get his family to pay taxes or perhaps payback for cooperating with the government. IS reactivated its cell in this district a few months ago and was carrying out weekly attacks. The government responded with a series of sweeps which resulted in no incidents at the end of September.

Kirkuk saw two gun battles both in the south. One left two Hashd wounded and the other two police injured. IS has bases in southern Kirkuk but violence fluctuates up and down in the province.

Diyala and Salahaddin were the main targets of IS during the week. There were 7 attacks in Diyala including a kidnapping that resulted in a death, two checkpoints shot at by snipers, and a candidate in October’s election having his house sniped at which killed a bodyguard. Usually IS concentrates in Muqdadiya and Khanaqin in the center and northeast respectively which it has de facto control over. This week like September the group is hitting the northwest likely to establish its power over that area as well which is already a transit route from Salahaddin. That governorate saw 5 incidents including two gun battles. Violence has gone up and down there week to week.

Azzam, "A sniper targets a candidate's home and kills a security guard," 10/6/21

- "An Explosive Device Explodes Near A Poultry Farming Project In Diyala," 10/7/21

- "Four farmers injured in an explosion of an explosive device east of Tikrit," 10/2/21

- "ISIS controls a security point and inflicts a victim and wounded on the Iraqi army in Diyala," 10/6/21

- "Killing and wounding 6 children in targeting an electoral conference in Baiji (video)," 10/7/21

- "Militants believed to be affiliated with ISIS behead an elderly man and burn his car north of Baghdad," 10/3/21