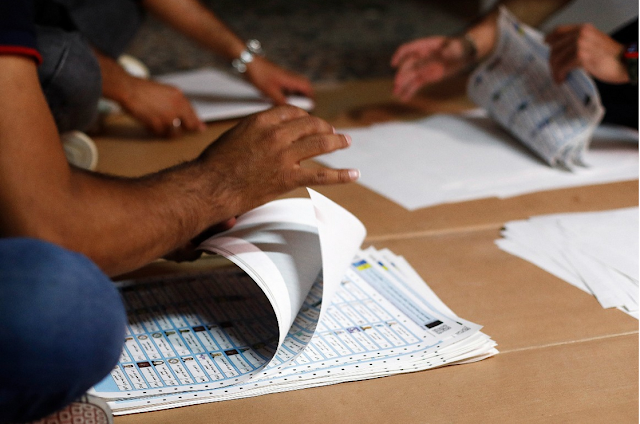 (AP)
Iraq’s 2021 election had some predictable winners mixed in with unexpected results. The main take away was that Sadr’s movement is the strongest political force in the country right now. Others did better than expected while some long standing parties faced crushing defeats. Two new parties won seats in parliament as well and will likely form the country’s first opposition.

As predicated, Moqtada al-Sadr’s Sairoon won the most seats in Sunday’s election for Iraq’s parliament. His list got 73 seats in the early returns up from 54 in 2018. (There are still 26 seats to be determined) The new election law favored parties that could mobilize voters across the country and had the money to pay for multiple candidates. Sadr had both with a mass following and a sophisticated and well funded political machine. He will lead the negotiations to form a new government, a position he’s been in before.

Speaker Mohammed al-Halbusi, Nouri al-Maliki and the Barzanis were the other big winners. Halbusi’s Progress Alliance/Taqadum won 38 seats, Maliki’s State of Law 37 and the Kurdistan Democratic Party (KDP) 32. Halbusi is the new leading Sunni politician. He’s had a running feud with financier Khamis al-Khanjar who ran the Azm list but it only got 15 seats. Halbusi’s dominance was shown before when Khanjar tried twice to unseat him as speaker and failed. Khanjar has also made a series of critical mistakes from backing the insurgency after Mosul fell to the Islamic State in 2014 to aligning with pro-Iran groups in 2018. Halbusi’s position is now solidified. State of Law appears to still have its base despite its leaders many mistakes. Maliki was forced out of office after the disgrace of losing Mosul. He then aligned himself with Iran and their Hashd allies while maintaining his own list based upon his faction of the Dawa Party. Finally, the KDP has become the dominant party in Kurdistan with the continued fracturing of the Patriotic Union of Kurdistan (PUK) after the passing of President Jalal Talabani and the Change List going from an opposition to an establishment party. They ran together and only got 15 seats down from 23 in 2018.

Hadi al-Amiri’s Fatah, Haidar al-Abadi’s Nasr and Ammar Hakim’s Hikma were the other big losers. Fatah had a large base as it represents many of the pro-Iran factions led by Amiri’s Badr. It was likely punished for its attacks upon the protest movement. Some members of the list have not taken their defeat well with Kataib Hezbollah claiming fraud. Fatah garnered only 14 seats down from 48 in 2018. Nasr and Hikma ran together as moderate Shiite religious parties and did even worse. They only got 4 seats versus 61 in the last election, a stunning reversal. Abadi led the pro-Western wing of Dawa against Maliki and was hoping his victory over the Islamic State would lead to a second term as Prime Minister in 2018. Hakim on the other hand comes from one of the most prominent clerical families in Iraq but he has not been able to get much of a following after he split with the Islamic Supreme Council of Iraq. He then joined with Sadr to back PM Abadi and others but both are sinking into irrelevance.

Two new parties also emerged on the national scene. New Generation won 11 seats and Imtidad 10. New Generation has been building in Kurdistan in opposition to the ruling KDP and PUK. It has taken the place of Change as the main voice of reform in the region. Imtidad came out of the protest movement. It was split over participation in the election with many deciding to boycott rather than take part in the political system. Still enough people came out and voted for this new list. The big question facing these two parties is whether they will join the new government or not. In past elections every list gets a position as their main goal is to loot the state and use it for their patronage networks to maintain their power. New Generation has seats in the Kurdistan parliament but chose not to join the government. Both it and Imtidad may do the same now and be the first opposition parties, a huge change in Iraqi politics.

Talks to pick a new president and prime minister are next. Sadr and Maliki are bitter enemies which could lead to the process taking even longer than usual. Current Premier Mustafa al-Kazemi is happy as he has an alliance with Sadr and the KDP. He’s hoping for a second term but negotiations can always take unexpected turns so nothing is decided as of yet. It will take months before things are sorted out.

Al Mada, “A new Sunni alliance aimed at ousting the speaker of parliament after announcing his break-up,” 5/14/19

Al Sumaria, “According to the preliminary results .. Al Sumaria publishes the seats of the blocs participating in the poll,” 10/11/21