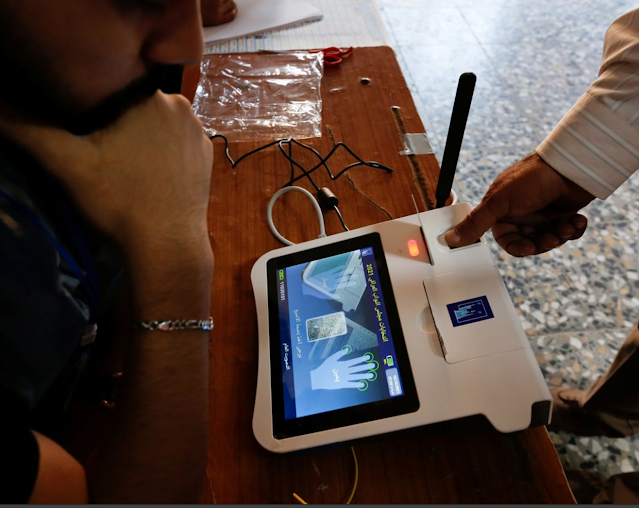 (Reuters)
Iraq’s Election Commission announced it will have a manual count of ballots from 8,000 polling stations. The Commission originally said it would have the results within 24 hours of the polls closing but there were massive problems with the electronic voting machines. This was a huge increase from the previous number the Commission gave of 3,100 voting stations having issues. The Commission said it would take a week to tally the ballots in two districts of Baghdad. This is causing controversy already as some are accusing political parties of interference with the Commission’s work and tallying of votes. More importantly it shakes the confidence in the entire system. This is the second time that Iraq has had difficulties with its voting machines forcing a recount but it doesn’t seem to learn.

That delay is not stopping political parties from making the first steps towards forming a new government. First, members of the protest movement and independents held a meeting in Baghdad about creating a bloc together. Imtidad is one such party which won 8 seats. On the other hand Fatah and State of Law gathered at Nouri al-Maliki’s house and agreed to cooperate and want to form the largest bloc to counter Sadr winning the most seats so far. One of the questions emerging from the balloting is what the protest parties will do. Will they join the new administration or become the first opposition movement in parliament? As for Maliki he is a longtime rival of Sadr so it was only natural that he would be attempting to gather allies and try to create the biggest list against Sadr. All signs point to a very contentious government formation process which usually takes months to complete.

Finally, despite the problems with the Election Commission there is already some good reporting on the winners and losers in Sunday’s vote. Rudaw has a detailed website listing the results for 15 of Iraq’s 18 provinces. Ali al-Mawlawi a senior analyst at Inside Iraqi Politics also Tweeted about the showings in two more governorates.

Sadr’s Sairoon won a sweeping victory coming in first in Babil, Baghdad, Basra, Dhi Qar, Diwaniya, Karbala, Maysan, Najaf and Wasit. It has 74 seats so far. Hamdi Malik of the Washington Institute for Near East Policy Tweeted about the sophisticated political machine Sairoon put together with an app, Al-Tayar, that provided GPS locations of polling stations, name of their candidates in each voting district and how to vote. According to the Twitter account Iraq & Middle East Updates Sairoon was able to win the most seats with roughly 653,000 votes even though the pro-Iran Fatah list got more with 675,000 because of Sadr’s better organizing.

Speaking of Fatah despite its built in base of Hashd members and their families it appears to have not prepared for the new voting system with multiple districts at all. The best it did was come in second in Diwaniya. In Baghdad it finished sixth and failed to gain any seats in Maysan, Muthanna and Najaf. Some claim it was punished for its ties to Iran, but Nouri al-Maliki is also aligned with Tehran and did much better. Fatah did have a very bad image for its attacks upon the protest movement but its lack of organization might be the real reason for its poor showing with just 13 seats.

Maliki’s State of Law gained a steady number of seats across the south and Baghdad showing that the former prime minister still has an effective machine behind him. State of Law won Muthanna and came in second in Babil, Baghdad, and Maysan and finished with 33 seats. Like Sadr, Maliki must have had an organization to get out the vote in different districts and told them which candidates to vote for.

The Kurdish parties finished as expected with a complete collapse for the Change list. The Kurdistan Democratic Party won Dohuk, Irbil and Ninewa and got 31 seats. Dohuk and Irbil are its home provinces so those were expected. Winning Ninewa shows that it has re-established itself there after the war with the Islamic State and losing the disputed areas as a result of the Kurdish independence referendum. The Patriotic Union of Kurdistan ran with Change and won Kirkuk and Sulaymaniya but only gained 8 seats. All of those went to the PUK leading most of the Change leadership to resign in disgrace. The PUK has been in disarray since its head President Jalal Talabani died in 2017. It recently went through another split when Bafel Talabani forced his cousin Lahur Talabani out of the co-chairmanship of the party. Change on the other hand was the first opposition party in Kurdistan but then tried to join the establishment by aligning with the PUK which it originally opposed. That has cost it dearly. Its place has been taken by New Generation that came in second in Irbil and Sulaymaniya, and third in Kirkuk with a total of 9 seats.

The other big winner on Sunday was Speaker Mohammed al-Halbusi’s Taqadum. It won Anbar and finished with 34 seats. Halbusi has been the pre-eminent Sunni politician in the country for the last few years and this solidifies his position. He has surpassed former leaders of the community like the Nujafi brothers and Iyad Allawi who always appealed to many Sunnis and has fended off challenges by financier Khamis al-Khanjar whose Azm list only got 7 seats.

Al Aalem, “The independents and the forces of October seek an alliance … and the Sadrist bloc: We will see them with us,” 10/13/21

Malik, Hamdi, “1. The Sadrists are stepping up their election campaign. A few days ago they launched their mobile app, al-Tayar on both android and IOS. The app provides a few services for supporters of the Sadrist movement. It gives them details of their constituency,” Twitter, 9/6/21

- “2. A GPS service to find the correct polling stations, name of the Sadrist candidate in their constituency, instructions on needed documents and how to vote, etc.,” Twitter, 9/6/21

Sotaliraq, “The opponents of the Sadrists reject the election results and rally around al-Maliki,” 10/13/21