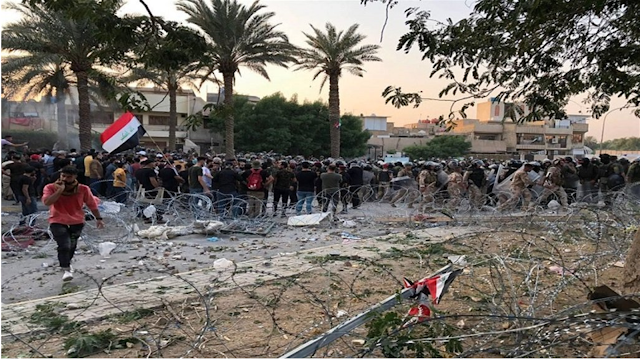 (Al Sumaria)
For the second time in two weeks Fatah followers tried to storm the Green Zone in Baghdad over their claims that there was voter fraud in the October election. This time there were deadly results. Fatah is trying to gain by force what it failed to achieve at the ballot box.

Things started off in the afternoon of November 5 as protesters marched on three of the entrances to the Green Zone. They began throwing things at the police who responded by firing into the air and shooting tear gas. Clashes then broke out which the Health Ministry reported led to over 100 people both demonstrators and police being injured. Members of the crowd then began shooting at the police who fired back. Early reports were that one demonstrator was killed. Later Buratha News claimed that 5 died. That should be taken with a large grain of salt as Buratha is repeating many stories from Fatah. At night the protesters made one more charge on the Green Zone but were turned back. The police have recklessly used live ammunition against demonstrators before that have led to fatalities. This time they were actually shot at as well since Fatah represents various pro-Iran Hashd factions such as Badr and Asaib Ahl Al-Haq. This was the feared outcome of Fatah’s protests. It wants to use force to gain more seats in parliament rather than accept the results.

Fatah did very poorly in the election going from 48 seats in 2019 to just 17 this year. That was because it failed to prepare for the new election law which set up several voting districts within each province. The list ran multiple candidates within each district which ended up competing against each other for votes. Rather than accepting its poor showing it has claimed voter fraud. That’s why they have been showing up in front of the Green Zone for the last several weeks.

This is the second time Fatah supporters have tried to storm the Green Zone. On October 23 they also tried to break into the area but were stopped by the security forces.

- “Reports of Casualties as Protesters Clash with Security Forces in Baghdad,” 11/5/21

Buratha News, “Leader of the Al-Fatah Alliance Hadi Al-Amiri strongly condemns the attack on peaceful demonstrators and calls for the killers to be held accountable,” 11/5/21

- “A new massacre committed by the government of Ibn Mashtat, the puppet, two martyrs and more than 140 wounded as a result of the anti-riot attacks on them,” 11/5/21

- A new toll for the victims of the massacre committed by the riot forces of Ibn Mashtat, five martyrs and 199 wounded,” 11/5/21

- “Sheikh Qais Khazali: Those who issued orders to shoot at the demonstrators must be held accountable, and we will not accept covering up the perpetrators,” 11/5/21

Al Hurra, “One dead and dozens wounded in the protests of the pro-Iranian factions against the results of the Iraqi elections,” 11/5/21

Iraq Newspaper, “Mubasher .. Al-Iraq newspaper publishes the names of the injured in the Al-Khadra clashes,” 11/5/21

Noor News, “The Iraqi Ministry of Health denied recording any deaths during the events in the vicinity of the Green Zone in central Baghdad, on Friday, stressing that the injuries ranged between light and moderate, without the presence of gunshot wounds,” 11/5/21

Shafaq News, “The first protester fell victim to a bullet wound in Baghdad,” 11/5/21

- “(Video) After bloody clashes, law enforcement forces withdrew and were stationed at the suspension bridge,” 11/5/21

Al Sumaria, “An exchange of fire between security and protesters in the Green Zone,” 11/5/21