Oct Saw Another Drop In Violence In Iraq 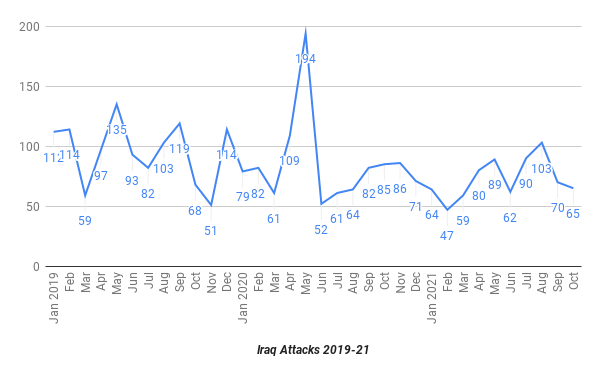 Winter is usually when the insurgency takes off and that’s true this year. Attacks by the Islamic State were down for the second month. Incidents by pro-Iran groups also decreased in October.

There were a total of 72 incidents reported in the media in October. There were 81 incidents in September and 133 in August. 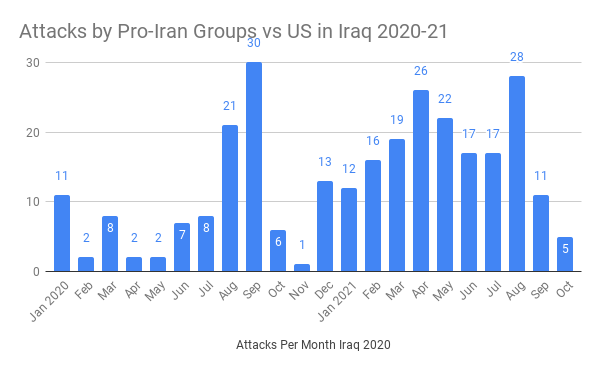 There were five attacks by pro-Iran groups. They hit convoys working for the U.S. in Basra, Baghdad, and Dhi Qar twice. Three IEDs were also dismantled in Babil along the international highway the trucks regularly travel upon. At the end of the month rockets were fired at the intelligence headquarters but fell short on the Mansour district. Prime Minister Mustafa Kazemi was in the building during the attack which might have been a message to the government over the election results where the Hashd factions did very badly.

Islamic State attacks peaked at 103 in August the most of the year before dropping to 70 in September and 65 in October.

They left 61 dead and 86 wounded. 1 Hashd al-Shaabi, 2 Peshmerga, 12 members of the Iraqi Security Forces (ISF) and 46 civilians were killed and 5 Hashd, 20 ISF and 61 civilians were injured. Diyala had half of the casualties with 79. 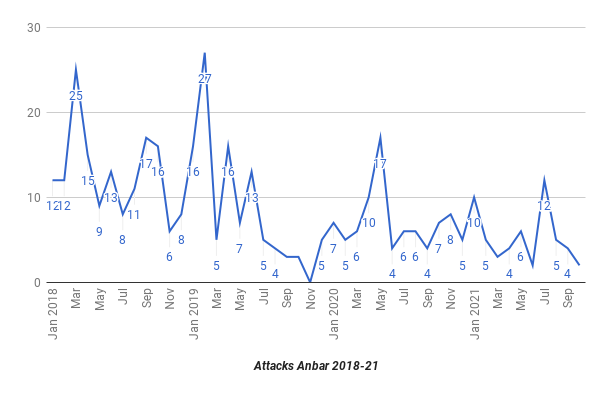 Anbar had the fewest IS incidents during the month. A suicide car bomb was destroyed in Ramadi, a rarity these days, and a checkpoint was attacked in the Rutba district in the west. The province is used as a supply route for the insurgency and therefore has few attacks during the year. 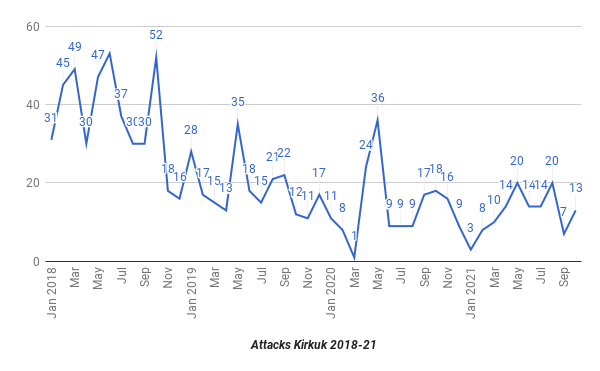 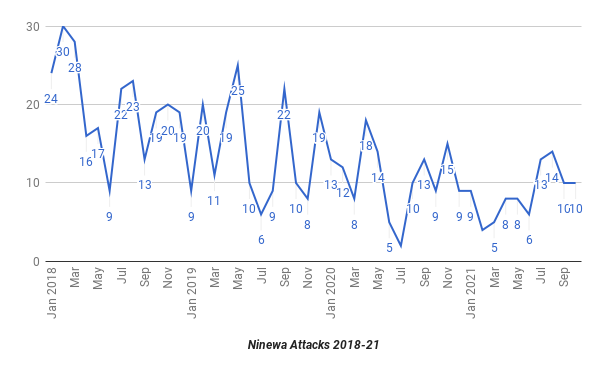 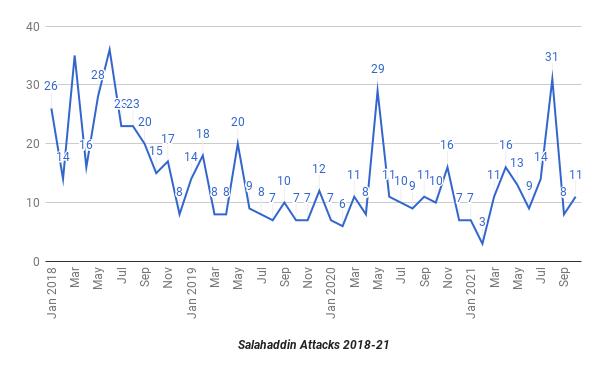 Kirkuk, Ninewa and Salahaddin were mostly sideshows in October. Of the 13 incidents in Kirkuk the biggest were two attacks upon voting stations during the election and two gun battles. Salahaddin was very similar with two shoot outs and four checkpoints attacked in one night. Attacks actually slightly increased in those two provinces. Ninewa is a logistics hub like Anbar. Most attacks are usually to keep civilians and the security forces away from its area of operations. There were two attacks upon checkpoints as well and a town was hit by mortar fire. 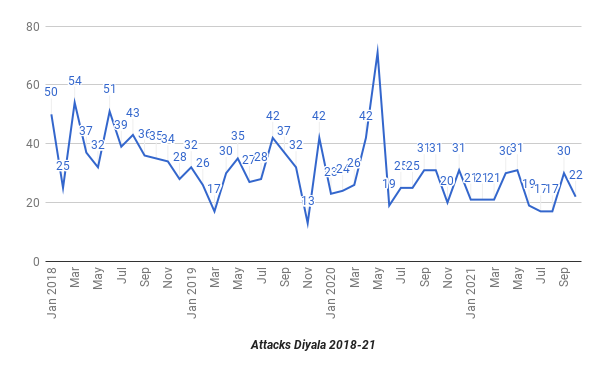 Diyala witnessed the most explosive event of the month. IS attacked a town in the Muqdadiya district in the center after it refused to pay ransom for two people it kidnapped. The attack left 17 dead and 26 wounded. The tribesmen then carried out a retaliatory strike upon neighboring Nahr al-Imam which it blamed for the incident. They killed seven people, burned 57 families, destroyed fields, and 350 families fled the violence. The Iraqi Observatory for Human Rights said that Hashd factions also executed civilians in the aftermath. The government sent forces and a curfew has been placed over the district ever since in an attempt to stamp out anymore retribution. IS has not been able to set off this much tension in years.

Iraq Newspaper, "The terrorist Daesh claims an attack on the Iraqi forces in Diyala," 10/26/21

Al Mada, “The government calls for action .. Ministry of Migration: 57 houses were burned in Muqdadiya,” 11/2/21

NINA, "A convoy of logistical support for the international coalition forces was targeted with an explosive device, north of Baghdad," 10/28/21

- "A Convoy Of Logistical Support For The Int'l Coalition Targeted With An IED In Dhi Qar," 10/19/21

Shafaq News, "An explosion targets a support convoy for the international coalition in the far south of Iraq," 10/13/21

- "Source: Al-Mansour bombing in Baghdad targeted the Iraqi intelligence headquarters at the moment of Al-Kazemi's presence," 10/31/21