Review Guests of the Sheik, An Ethnography Of An Iraqi Village 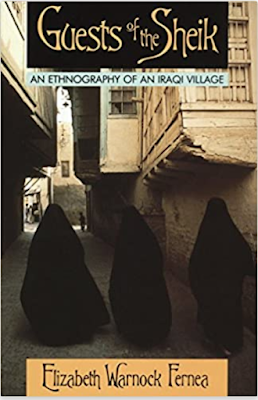 Guests of the Sheik, An Ethnography Of An Iraqi Village might be one of my favorite books about Iraq. In 1957 newlyweds Elizabeth Warnock Fernea and her husband Bob went to the small town of El Nahra in southern Iraq so that her husband might do an anthropological study of tribal life. Fernea knew little about the Middle East and only had a basic course in Arabic before leaving. She decided to live traditionally with the women of the village which filled her with much trepidation. She became integrated into the town as it became her new home for the two years that she lived there, which she brought to life with her writing.

Fernea started off completely frustrated when she arrived in El Nahra. She immediately got in an argument with her husband Bob over whether she would wear the abaya a long black robe or not. She was opposed but was eventually talked into it because they were guests in the village. She then felt out of place when she started visiting women. Her Arabic was so limited she could barely respond to what they said. She also had her laundry done by a local boy. Together this led to much gossip that she was dumb, stuck up and lazy. She felt alienated and a total stranger. This was an American woman in the 1950s not only in the Middle East but in a very small rural and traditional village. Culture shock was to be expected.

Things eventually changed and for the better which is what the majority of the book is about. She has story after story about how she finally fit in. Her Arabic improved for instance so that she understood the teasing that the ladies liked to use and could respond in kind. She understood that you say no when you are initially offered things, that passing out cigarettes was a basic courtesy during a gathering, and more. She was also able to get a grasp of the mores of the village such as when women could see men and when not. She witnessed weddings and funerals. She went on a pilgrimage to the Shiite shrine in Karbala and saw muharram the celebration of Hussein’s martyrdom one of the most important days for Shiites. Instead of living apart as she first initially felt she became part of the community. She established true friendships and came to appreciate Iraqi culture and the place women held.

Fernea wrote that she hoped that her and her husband could be a bridge between East and West when they first arrived in El Nahra. She believed that they could teach some Western customs to Iraqis. Instead, it was they who were changed. They really became part of the town and were embraced by the inhabitants. It’s those stories about her integration that drive the book and make it so interesting.

Email ThisBlogThis!Share to TwitterShare to FacebookShare to Pinterest
Labels: Monarchy