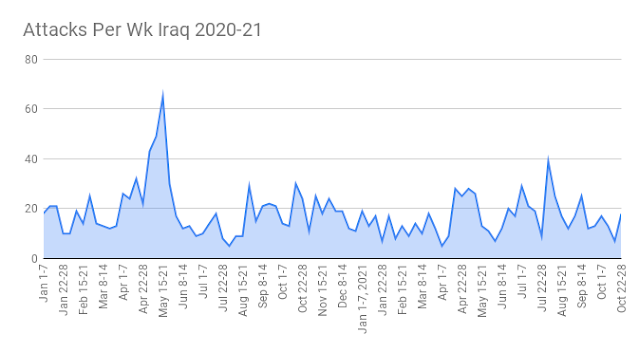 The last week of October saw an explosion of tension in central Diyala as the Islamic State attacked a village and then the inhabitants carried out a retaliatory strike upon a neighboring town. The government was afraid this would set off sectarian attacks and tensions remain high there.

There were a total of 21 incidents reported in Iraq from October 22-28. One was the retaliatory attack by tribesmen in Diyala, two were by pro-Iran groups leaving 18 by the Islamic State.

Those left 36 dead and 42 wounded. 1 Hashd al-Shaabi, 7 members of the Iraqi Security Forces (ISF) and 28 civilians were killed while 2 Hashd, 4 ISF and 36 civilians were injured. That was the highest weekly casualty count since the middle of July. 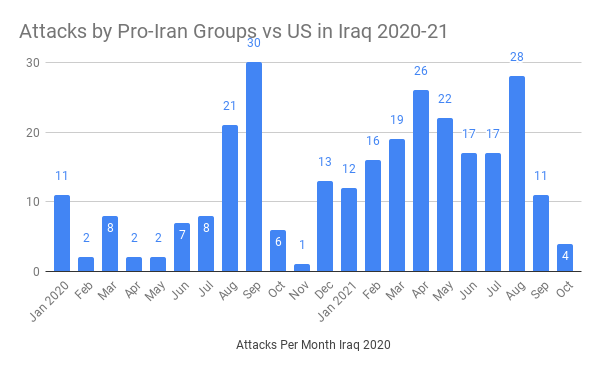 Pro-Iran factions hit two convoys working for the U.S. in Dhi Qar and Baghdad with IEDs. These groups largely halted operations in the lead up to the elections but are now slowly going back to work. There have been four attacks by them this month versus 11 in October and 28 in September.

The insurgents were quiet in Baghdad over the last few weeks as the government launched a series of security sweeps through Tarmiya in the north where IS reactivated its cell. The last week of October it was back with four incidents including beheading a civilian, two more shootings, plus a sticky bomb aimed at a police commander.

Kirkuk and Ninewa only experienced scattered attacks. A sniper killed a soldier in southern Kirkuk. Two IEDs went off in Ninewa one of which was left over from the war. IS has bases in both provinces but violence goes up and down each week.

In Salahaddin IS attacked four checkpoints in one night in the Baiji district. That resulted in two soldiers being killed and two more injured. Like Kirkuk and Ninewa, attacks wildly fluctuate.

Diyala was back as the center of IS operations during the fourth week of October. There was a kidnapping, two villages got hit with mortars, and two checkpoints were attacked. The biggest incident was when the insurgents attacked the Rashad village  when it refused to pay ransom for two men it seized. IS killed 17 and wounded 26. Tribesmen from the village then attacked the neighboring Nahr al-Imam town in retaliation killing 7 and wounding another 5 along with burning homes. According to Iraq Oil Report the two villages had bad blood between them. 350 families fled as a consequence fearing more payback attacks. Baghdad rushed in troops to secure the area afterwards and some high profile officials such as Badr head Hadi Amiri who is from Diyala arrived in the area to check on the situation. The two incidents occurred in the Muqdadiya district in the center of the province where IS has de facto control of many rural areas. It showed how IS attacks can set off sectarian tensions in the country.

Iraq Newspaper, "The terrorist Daesh claims an attack on the Iraqi forces in Diyala," 10/26/21

- "A convoy of logistical support for the international coalition forces was targeted with an explosive device, north of Baghdad," 10/28/21

- "Three people, including a security member, were injured in an explosive device explosion in Diyala," 10/26/21

- "A village within the Hamrin Basin, northeast of Baquba, comes under a mortar attack," 10/28/21

- "Victims and wounded in an ISIS attack on military checkpoints in Salahaddin," 10/27/21