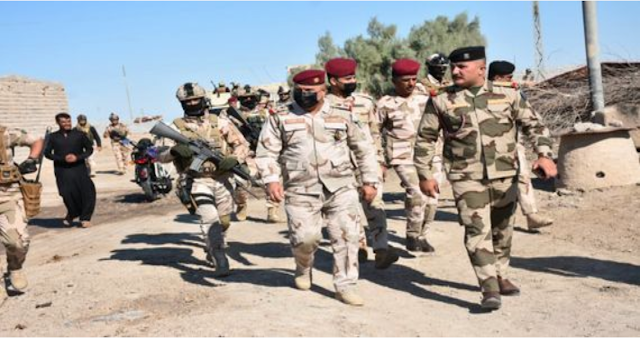 (NINA)
The U.S. just issued a quarterly report about Operation Inherent Resolve its anti-Islamic State campaign in Iraq and Syria. This one focused upon the continued institutional problems within the Iraqi Security Forces (ISF).

One major issue is how the ISF conducts itself out in the field. Most of the time it just focuses upon presence operations where it carries out patrols during day and mans checkpoints. These are routine and almost never run into the Islamic State which mostly operates at night.

Next were the major sweeps that the ISF does. Most of these are announced beforehand, have poor security and are very predictable as a result. The results are usually arms stashes being found but very few if any insurgents ever killed or captured. The Islamic State simply avoids them.

Poor use of intelligence has been a constant criticism by the U.S. The report said that the Iraqis need to go through intelligence reports much quicker and then act upon them immediately. There was one example where an IS fighter was captured in Anbar and it took five days for the ISF to launch a raid based upon what they found. That lacked command and control and had poor logistics and execution. The Iraqis still rely upon the U.S. for much of its intelligence as well.

The bureaucracy within the ISF and Defense and Interior Ministries was mentioned. First, the entire system is corrupt which affects everything such as receiving supplies to procuring equipment. Paperwork is also extremely slow due to personal vendettas, infighting between units and between the Defense and Interior ministries. Corruption is endemic throughout Iraq so that should be no surprise. Likewise the Iraqi bureaucracy is infamous as well for being slow and inefficient. It still largely relies upon a paper system.

There are other dysfunctions within the system. For instance, most operations are done unliterally by the provincial commands. Those often don’t provide reports on what they are doing to its superiors. This is unusual since Iraq’s government and ISF is known for its top down structure. The decentralization of power to provincial commands is definitely an exception to the rule. The Americans have been pushing for the Iraqis to give more power to subordinates but working independently without coordination from the top was not what it was thinking of.

Speaking of centralization that is a problem with the Air Force. Outside of the Counter Terror Service there are only two people who can authorize air strikes. Those are the Joint Operations Command deputy commander and the chief of staff who has to call the deputy commander first. This is more in line with Iraqi tradition since the Ottoman days that most decisions even the most miniscule most go all the way to the top to be authorized. This problems is made more difficult by the fact that coordination between the Joint Operations Command and the Air Force is poor. The Air Force is also reluctant to go ahead with an operation without Coalition intelligence. This means there are few strikes. During the third quarter of 2021 there were 270 air sorties only 9% of which were combat ones.