Review Night Draws Near, Iraq’s People In The Shadow Of America’s War 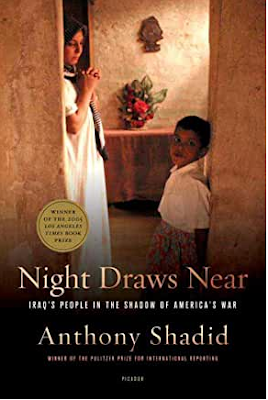 Anthony Shadid was a reporter for the Washington Post who went to Iraq before, during and after the 2003 invasion. He was Arab and spoke the language which gave him far greater access to the average Iraqi than most Western journalists. That was what Night Draws Near, Iraq’s People In The Shadow Of America’s War focuses upon, average Iraqis and their feelings about the events that swept over their country. As he wrote, the fall of Saddam Hussein wasn’t a finale as the White House believed but the start of a new period in Iraqi history marked by dramatic changes, war and lots of suffering.

The strength of the book is Shadid’s writing and the array of Iraqis he met. He said, “Iraq was an unwilling participate, drafted into a fight that it did not solicit. The Americans brought a revolution without ambition and an upheaval without design.” As many Iraqis told the author the U.S. could never understand Iraq and that meant they were doomed to failure. For instance, many Americans believed that the Iraqis had to step up and take more responsibility for their nation whether that be joining the police or taking part in the new government. To the Iraqis however they were being pulled in all different directions. Those that joined the police for instance were accused of being traitors and received death threats from insurgents. There was also a general mood that the U.S. were foreign occupiers that shouldn’t be in Iraq to begin with. The Americans also made many promises of a bright new future which was buoyed by the image of the United States as being all powerful. The U.S. couldn’t deliver. They were overtaken by the words and actions of insurgents and militias which usually carried through with what they said. The idea of stepping up therefore was fraught with danger and many had no desire to work with the Americans.

Other times the book focuses upon specific events like the emergence of Moqtada al-Sadr as a political force. Shadid goes into Sadr’s father Ayatollah Mohammed Sadiq al-Sadr who built up a grassroots religious movement under Saddam who was then assassinated. Moqtada took up his father’s mantle after 2003. He took on not only the U.S. occupation but the clerical establishment for being quiet during Saddam’s era along with the returning exile parties for fleeing the country and not staying like he did. Shadid wrote that the Sadrists were about God, money and guns with the last eventually taking over as Sadr’s Mahdi Army staged armed revolts twice in 2004. It also had a vice and virtue committee that made women cover themselves, closed liquor stores and more usually through threats and violence. The U.S. tried to dismiss Sadr as a thug, but it was a blaring example of how the Americans were caught flatfooted about the directions Iraq was going in after the fall of the regime. A religious leader with a militia was not the liberal democratic country Washington was hoping to usher in and spread across the Middle East. It struggled to deal with Sadr as a result.

Finally, Shadid begins and ends his book by drawing parallels between the British and American experiences in Iraq. Like the U.S. the British invaded the country during World War I claiming they were liberators not occupiers but became the latter. In 1920 Iraqis rose up trying to expel the English just like the insurgency and Mahdi Army fought the Americans. Both powers thought they could shape Iraq into what they wanted but never took the time to understand the country they were ruling. The result was plenty of disappointment and violence. The American war was more glaring because it could have studied history and seen what London tried to do before but it didn’t. It went in completely ignorant of Iraq and paid the price.

Night Draws Near is one of the few Western books that focuses solely upon average Iraqis. There are POWs from the Iran-Iraq War, families, a book seller and more. Each opened up a little bit of their lives to Shadid and he did an excellent job putting their words into print. Like any country there are a diversity of views and experiences from the high of the Saddam Hussein being removed to the lows of two daughters almost being kidnapped in Baghdad. It makes the book a must read for those wanting to learn about Iraq after 2003.