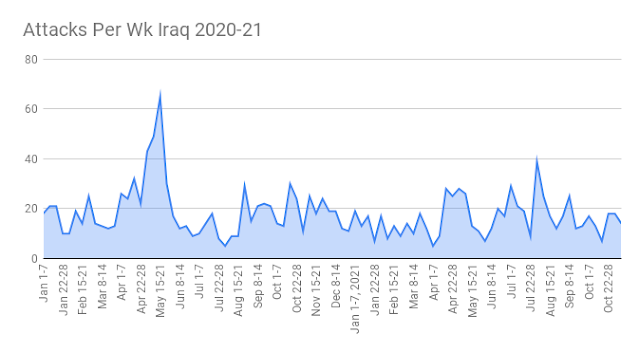 Security remained largely the same for the 7th week in Iraq. Incidents by the Islamic State remained in the teens and there was one attack by Pro-Iran forces.

There were a total of 15 incidents reported in the media in Iraq from November 8-14. That compared to 20 the week before. 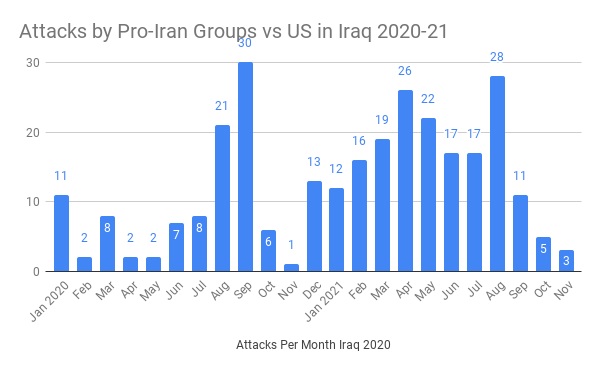 One of those was by pro-Iran groups. They hit a logistics convoy working for the U.S. in Diwaniya. Since the October elections these factions have dramatically cut back their operations. There used to be several attacks a week but now there is only about one per week. They seem to be more focused upon their poor showing in the vote then targeting the Americans right now.

Those left 11 killed, 2 members of the Iraqi Security Forces (ISF), 4 Hashd al-Shaabi and 5 civilians. There were another 18 wounded, 4 ISF, 5 Hashd, and 9 civilians. Salahaddin with 13 casualties and Kirkuk with 12 had the most dead and wounded during the week.

There was just one incident in Anbar when an IED was dismantled by a power tower. The power network was a major target during the summer. Anbar is still not a priority for IS attacks because it is a logistics hub.

Diyala is usually the focus of the Islamic State but it hasn’t been for the last several weeks. There were only three incidents during the week and they were all on one day, November 13. That day there was mortar fire that wounded two civilians, a police officer was gunned down and there was a shot out in the Hamrin Mountains. IS seems to be exploring other areas of the country rather than concentrating upon Diyala currently.

Kirkuk, Ninewa and Salahaddin all had the same amount of violence. There were three separate IEDs in Kirkuk all targeting the security forces. In Ninewa an infiltration attempt was stopped, and IED went off and IS attacked a Hashd unit. Salahaddin had the biggest incidents of the week. After the insurgents attacked a group of fisherman in the Amerli district in the east there were two days of fighting. The Iraqi Air Force was even called in to bomb the area. IS also assaulted a Hashd brigade. The incidents in Ninewa and Salahaddin show how while the total number of attacks is very low in Iraq the insurgents are testing the security situation. The group is looking for new areas to operate in and seeing how the security forces react. Thus the attack upon the Hashd in Ninewa which rarely happens there and the two days of fighting in Salahaddin. Usually IS just concentrates upon hit and run tactics and stand off tactics like IEDs and snipers. These were two up close and personal confrontations. This is a new step in the Islamic State’s attempt to rebuild in the country.

NINA, "An Attempt To Blow Up An Electric Power Tower In Western Anbar Thwarted," 11/11/21

- "A Member Of The Tribal Mobilization Forces Martyred South of Mosul," 11/9/21

- "A police officer was killed in an armed confrontation with wanted men in Diyala," 11/13/21

- "A Soldier Martyred And Another Wounded In An Explosive Device Explosion South of Kirkuk," 11/14/21

NRT, "One Killed In ISIS Attack On Fisherman In Saladin Governorate," 11/9/21

- "An attempt to infiltrate ISIS militants in Mosul thwarted," 11/8/21

- "An explosion targets a convoy of the international coalition in southern Iraq," 11/9/21

- "With the intervention of warplanes .. Amerli clashes ended with 7 casualties and injures," 11/10/21