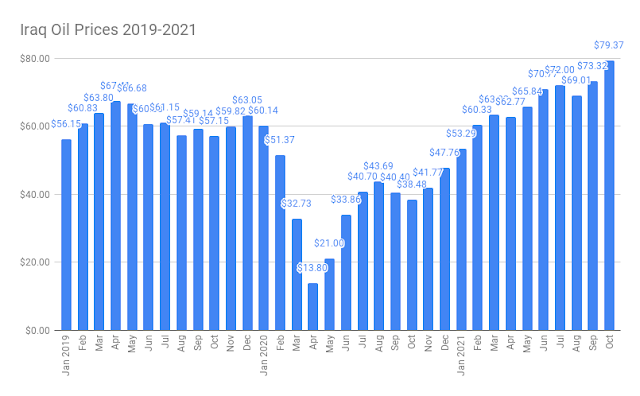 As the global energy market continues to recover from the COVID pandemic so does Iraq’s revenues. In October the country made the most money in three years from its oil industry.

In October Iraq averaged 3.12 million barrels a day in petroleum exports. That was up from 3.081 million barrels in September and the highest amount since May 2020. That’s due to rising production that has increased since June when OPEC+ quotas were eased.

Prices for Iraqi crude have been rising as well. One barrel sold for $79.37 in October, the most since October 2014. That brought in a total of $7.68 billion in revenues, a three year high.

For the year exports have recovered to 2020 levels. That year Iraq averaged 2.996 million barrels a day. This year it’s averaging 2.968 million. Prices and revenues are almost double what they were last year. In 2020 a barrel of Iraqi oil sold for $38.80 versus $67 in 2021. Last year the country averaged $3.493 billion a month in petroleum revenues versus $6.063 billion this year. The industry collapsed at the start of 2020 in a price war between Russia and Saudi Arabia followed by a dramatic drop in global demand due to COVID. OPEC and others then instituted production quotas to try to bring prices back up, which has finally happened. Iraq couldn’t be happier as it is the most oil dependent country in the world.