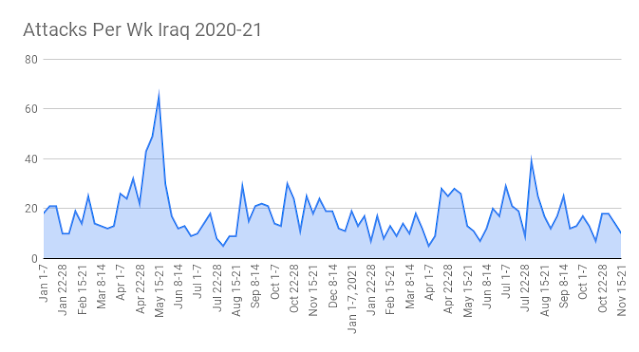 Security has remained relatively the same for the last nine weeks. Attacks by the Islamic State have been in the teens to tens while incidents by Pro-Iran groups have fallen off since the October elections.

From November 15-21 there were just 14 security incidents reported in the media. There were 15 the week before and 20 the first week of the month. 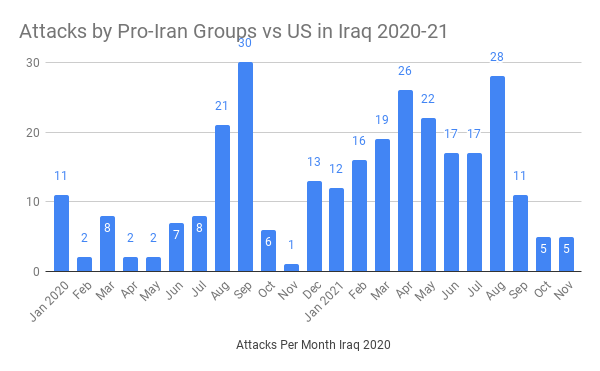 4 of those incidents were by pro-Iran groups. A logistics convoy working for the U.S. was hit by an IED in Dhi Qar and another bomb was dismantled along the international highway in Babil. Rockets were also fired at a Turkish military base in Ninewa while a truck full of missiles was also discovered in that province and destroyed. These factions considered Turkey’s presence in northern Iraq as a second occupation and have occasional attacked it as well.

There were just 10 incidents by the Islamic State. There were 14 the second week of November, and 18 the first week. During the winter IS routinely goes dormant after its Ramadan and summer offensives. This is not related to the weather but rather the trend that was set starting in 2003 that has continued since then.

These incidents led to just two people being killed, one member of the Iraqi Security Forces (ISF) and one civilians, while four were wounded, 2 ISF and 2 civilians. 5 of those casualties happened in Diyala and the other in Ninewa.

In Anbar three shepherds were kidnapped in the Rutba district in the west. This was likely for ransom to raise money.

Three IEDs were dismantled in Iskandiriya in northern Babil. If IS doesn’t attack the Jurf al-Sakhr district it usually targets Iskandiriya instead.

Diyala had the most incidents during the week with four. That included two shootings, an IED and mortar fire. Two of these incidents occurred in the Khanaqin district in the northeast, one in Muqdadiya in the center and one in Khan Bani Saad in the southwest. All were low level and likely meant to keep the security forces and civilians out of insurgent areas.

In southern Kirkuk two suicide bombers were killed. Suicide bombers are very rare these days and they might have just been two IS members moving through territory who were intercepted by the security forces.

Ninewa had the biggest incident as the militants attacked the Hashd in Hatra in the south. IS has been carrying out offensive operations there in the last few weeks which is a change because the group usually just focuses upon moving in men and material from Syria through the governorate. IS is either trying to keep the Hashd out of the area or expanding into it and trying to assert its dominance. An old IED also wounded a person in the western Tal Afar district.

Finally there was a gun battle in the Yathrib district in southern Salahaddin and a sniper took a few shots at a checkpoint in Dhuluiya. Incidents have gone up and down each week in the province.

- "The Popular Mobilization Forces repel an ISIS attack in Nineveh," 11/17/21

- "Two people killed and injured in an explosive device explosion in Diyala," 11/19/21

- "An explosion targeting the international coalition in southern Iraq," 11/19/21

Sotaliraq, "Ninewa: The missile launchers were aimed at the camp of the Turkish forces, and we do not want useless proxy wars," 11/19/21

Al Sumaria, "The crowd announces the response to a new ISIS attack in Salahaddin," 11/19/21

- "Dismantling an explosive device prepared to target the logistical support in Babil - Urgent," 11/16/21