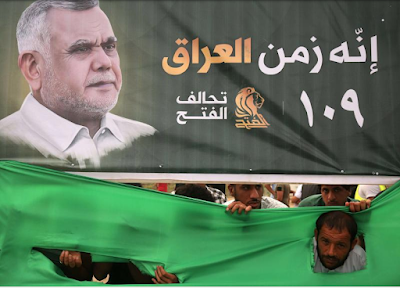 (AFP)
The Fatah list is refusing to accept that it did not do well in Iraq’s latest election. On November 1 the coordinating committee which is led by Fatah said that it rejected not only the results of October’s balloting but the recount that is currently going on. It demanded that all the ballots be recounted manually. The committee is pushing this agenda with protests in Baghdad and various southern cities. The Election Commission said that its recounts match the initial electronic totals so far, which means Fatah is not picking up any more seats in the new parliament.

The reason for Fatah’s failure at the ballot box was its poor organizing. Although it got 670,000 votes compared to 650,000 by Moqtada al-Sadr it only won 17 seats versus 74 for Sadr. The difference was in how the two prepared for the new election law which created multiple districts in each province. Sadr’s Sairoon not only nominated candidates for each district but had a phone app and used social media to get its supporters to the polls. Fatah in contrast, ran multiple candidates in each district and lost as a result. There were also new parties that should have run with Fatah that ran separately and cost it. In the 5th district of Basra for instance, the Sadrist candidate won 6,879 votes, the Fatah one 4,982 and Kataib Hezbollah’s Haqooq Movement pulled 4,438 thus splitting the vote for pro-Iran elements. In Dhi Qar’s 2nd district, Sairoon ran one candidate and Fatah two and was defeated. Fatah believed that its standing in the war against the Islamic State, its built in base of Hashd al-Shaabi fighters and their families, and its anti-American stance would lead it to another high seat count in parliament. It failed to study the new rules and suffered the consequence. No recount can save it from its lack of preparation.

The real question is what lengths Fatah will go to push its case. Will it continue with the protests or will it threaten violence? On October 31 for instance, rockets were fired at the Iraqi intelligence service headquarters while Prime Minister Mustafa al-Kazemi was visiting. This might have been a message to the government to give into the coordinating committee’s demands. Will more such incidents occur? This could be a very destabilizing force in Iraqi politics if it does.

Al Aalem, “Despite matching the results of the appeals .. the coordinating framework renews its refusal, the sit-in and the threat of escalation,” 11/1/21

- “Escalating objections against the election results .. a first step or an attempt to gain time?” 10/28/21

Al Hurra, “The strategy of the new law … How did the Sadrists overthrow the Al-Fatah Alliance in the elections?” 10/24/21

Al Noor, “The Electoral Commission announces the matching of manual counting and electronic counting in Babil,” 10/28/21

Al Sumaria, “The Sadrist movement announces an increase in the number of its parliamentary seats,” 10/27/21