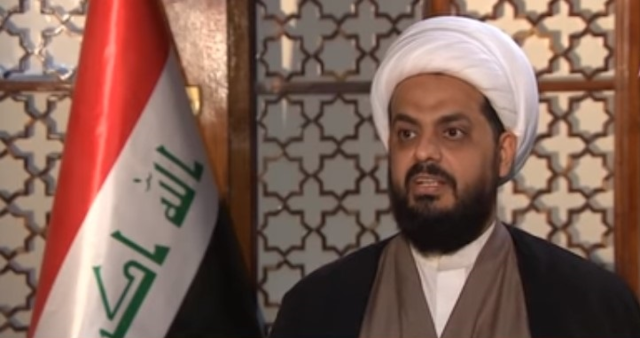 Asaib Ahl Al-Haq's Qais Khazali (Buratha News)
Immediately after a pro-Iran group hit Prime Minister Mustafa Kazemi’s residence in Baghdad’s Green Zone it wasn’t clear how much push back they would receive. Asaib Ahl Al-Haq, Kataib Hezbollah and Fatah List members all played down the attack, questioned whether it even happened and tried to deflect blame to the United States. Asaib Ahl Al-Haq’s Qais Khazali has continued with that line saying that Israel and America were behind the attack. Now it’s been reported that Iran has condemned the incident and the Coordinating Committee representing many of the Shiite parties has done the same.

The day of the attack the head of the Iranian Revolutionary Guards Quds Force commander General Ismail Qani arrived in Baghdad. He said that he was against anything that threatened the security of Iraq. It was then reported that he told PM Kazemi and President Barham Salah that Iran would help investigate the incident and that Qani was upset that it happened. He supposedly told the Hashd factions to backdown, accept the election results and unify the Shiite parties. If true this is of the utmost importance because Tehran is the sponsor of these groups. If they are going to listen to anybody it’s going to be Iran.

The pro-Iran groups are getting pressured domestically as well. Kazemi, President Barham Salah and the head of the Supreme Judicial Council met with the Coordinating Committee which represents most of the Shiite parties at former Prime Minister Haidar Abadi’s home. Khazali and the head of Kataib Hezbollah Abu Hussein al-Hamidawi were also in attendance. According to Bas News they admitted that Hashd groups were involved in the drone incident and agreed to turn over three fighters who were involved. In return they want policemen who were behind the killing of a Hashd member in the attempt to storm the Green Zone to be brought to trial. An attack upon Kazemi crossed the line for all the political factions. That’s because if the Hashd groups could get away with that they could attack anyone in Iraq. Thus the Shiite parties have come together and agreed to offer up some sacrificial lambs to try to move past this event and get the pro-Iran groups to stop with the violence.

Buratha News, “Sheikh Qais Al-Khazali: We have doubts about the attempt to assassinate Al-Kazemi, and we are inclined to the hypothesis of a third party,” 11/9/21

Shafaq News, “An agreement to arrest three “involved” in the bombing of Al-Kazemi’s house in exchange for the trial of those responsible for killing the protesters,” 11/9/21