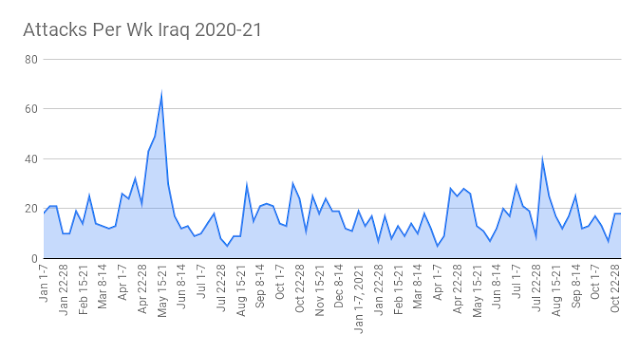 Security in Iraq has remained stable for the last seven weeks. Islamic State attacks have remained in the teens to twenties each week. Pro-Iran groups on the other hand made a major escalation with an attempt upon the life of Prime Minister Mustaf al-Kazemi.

There were a total of 20 security incidents reported in the media in Iraq from November 1-7.

They left 3 dead, consisting of 3 Hashd, and 21 wounded, 5 Hashd, 8 members of the Iraqi Security Forces (ISF) and 8 civilians. Diyala had the most casualties with 8. 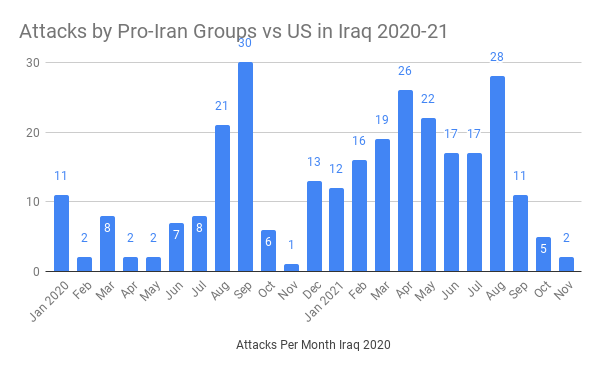 Two of the incidents were by pro-Iran groups. They fired rockets at a Turkish military base in Ninewa. These factions consider Ankara’s presence in northern Iraq as a foreign occupation and have occasionally attacked their bases as a result. More importantly a Hashd group launched a drone strike upon PM Kazemi’s residence in Baghdad’s Green Zone slightly wounding the premier and five of his bodyguards. Various Hashd al-Shaabi groups are members of the Fatah list which did poorly in October’s election and trying to use violence to change the results.

Anbar and Ninewa have few incidents as IS is more interested in using the two provinces to move in people and material from Syria. In Anbar a checkpoint was attacked in the Rutba district in the west that left four soldiers wounded. In Ninewa an old IED went off in Hamam al-Alil that wounded two and there was a gun battle.

Babil is a target of opportunity. IS regularly targets the Jurf al-Sakhr district in the northeast which is a large Hashd base. During the week there was a shootout and an IED both targeting the Hashd in that area.

Diyala is where IS is usually the most active in Iraq. During the week there were six incidents, all low level with five shootings plus some IEDs that were unsuccessfully dismantled by the Hashd that left two wounded.

Kirkuk and Salahaddin have seen attacks go up and down every week. The insurgents launched two major attacks in Kirkuk, one involved gun and mortar fire and the other was when an army base was hit with mortars. In Salahaddin a checkpoint was assaulted.

The Islamic State is also testing security around the country. Before it was probing the disputed areas of southern Irbil which is divided between the peshmerga and the ISF. This week it carried out two attacks in Kifri, Sulaymaniya. The group appears to be looking for new areas it can operate in which is a step up in its overall operations despite the total number of incidents remaining low.

Buratha News, "The thwarting of an ISIS attack in Jurf Al-Nasr by the 47th Brigade of the Popular Mobilization," 11/5/21

NINA, "2 Of The PMF Injured In An Operation To Track Down ISIS Remnants In Hamrin Mountains," 11/3/21

- "The martyrdom of a member of the Popular Mobilization Forces north of Babylon," 11/6/21

- "The martyrdom of a Popular Mobilization fighter in Akbashi sector, northeast of Baquba," 11/2/21

- "Two civilians were wounded by an explosive device left behind by ISIS, south of Mosul," 11/6/21

- "Two security personnel were wounded in a night attack northeast of Baquba," 11/7/21