Security has been relatively stable in Iraq. For the last ten weeks attacks by the Islamic State have been in the teens and tens. Pro-Iran groups are slowly ramping up their operations against the U.S. however.

There were 15 security incidents reported in the media in Iraq from November 22-28. The week before there were 14 incidents, the second week of November there were 15 and 20 the first week of the month. 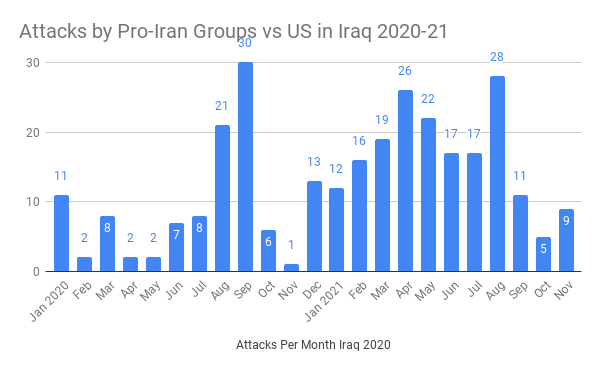 Four of those were by pro-Iran groups. They hit logistics convoys carrying supplies for the U.S. with IEDs in Basra, Muthanna and twice in Diwaniya. That was a large increase. In October for example there were just 5 attacks total. These factions have been busy with the elections and their poor showing but now they appear to be going back to targeting the U.S. as the deadline for its combat troops to withdraw from Iraq approaches at the end of the year.

They left 10 dead and 14 wounded. 1 civilian, 1 Hashd al-Shaabi, 3 members of the Iraqi Security Forces (ISF), and 5 Peshmerga died while 4 civilians, 4 Peshmerga and 6 ISF were injured. Diyala had the most casualties with 12 followed by 9 in Sulaymaniya. There was just one other death in Salahaddin.

In Baghdad three IS members attempted to escape from Taji prison. They were caught and one was killed in the process.

Diyala had the most incidents as usual. There were four shootings and an IED upon the police. Four of the attacks were in the Muqdadiya district in the center and the fifth was in Buhriz in the south. Most of these low-level attacks are aimed at keeping civilians and the security forces out of IS controlled areas.

Ninewa and Salahaddin had similar incidents. The former had two IEDs go off, while in the latter a sniper shot at a checkpoint.

Sulaymaniya had the biggest incident of the week when another checkpoint was targeted by a sniper that left 5 Peshmerga dead and 4 others wounded. Later that day another checkpoint was targeted. While attacks are very low in Iraq right now IS is probing new areas to see how security is. In September for instance the group was attacking Irbil. This month they have carried out a few operations in Sulaymaniya. It shows that while the insurgency is at a very low level it is attempting to expand into new areas of the country.

NINA, "4 Security Personnel, Including An Officer, Injured In An IED's Explosion In Diyala," 11/26/21

- "A Government Employee Seriously Injured In An Armed Attack In Diyala," 11/25/21

- "A logistical convoy of the Iraqi forces was exposed to an explosive device explosion in Diwaniyah," 11/28/21

- "One soldier was killed and three others were wounded in an ISIS attack in Diyala," 11/22/21

- "The Popular Mobilization confronts the ISIS attack in Al-Mu'tasim district in Salah Al-Din," 11/24/21

- "A woman was injured in the explosion of an explosive device left behind by ISIS in Sinjar district," 11/22/21

Shafaq News, "A bombing targets the logistics support of the coalition in the far south of Iraq," 11/25/21

- "An explosion targets an Iraqi convoy carrying equipment for the International Coalition in Al-Muthanna," 11/28/21

Al Sumaria, "The cell narrates the details of the attempted escape of three terrorists from Al-Taji prison," 11/27/21