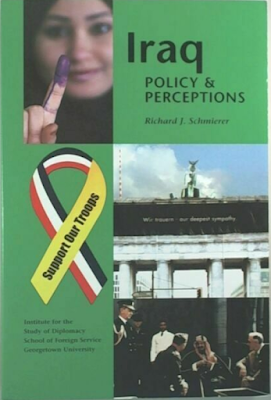 It’s quite a feat to write a book that gets progressively worse but that’s what former foreign service officer Richard Schmierer did with Iraq Policy & Perceptions. Schmierer ended his diplomatic career stationed at the U.S. Embassy in Baghdad from 2004-05 and then went to work for the Institute for the Study of Diplomacy at Georgetown University. He remained interested in the war and taught about it which motivated him to write the book which was aimed at providing background to the conflict. He starts off with giving justifications for the 2003 invasion and then consistently goes off track with completely incoherent chapters that can’t stay focused upon the subject matter.

Schmierer’s problems start in the opening when he gives his reasons why the U.S. was right to invade Iraq in 2003. One was that the U.S. put troops in Saudi Arabia to enforce the no fly zone over southern Iraq. Osama bin Laden demanded that the Americans leave which led the author to claim that Iraq was responsible for the birth of Al Qaeda and indirectly 9/11. The second was United Nations sanctions which devastated the Iraqi public and the author wanted to end. That would only happen if Saddam Hussein was deposed. That leads to the next issue that the sanctions remained because Iraq never proved that it had destroyed its WMD which was a violation of various U.N. resolutions and those authorized America to invade. Last, Schmierer supported President Bush’s effort to bring democracy to the Middle East. The author never considered whether focusing upon Iraq after 9/11 was right to begin with. Instead he tries to justify the invasion. His first point is the most galling. He basically says an unpopular U.S. policy was Iraq’s fault. Next, Saddam definitely bears the heavy burden for the embargo never ending but the U.S. maintained sanctions to contain Iraq not just because it didn’t come clean to U.N. weapons inspectors. It could have made them far less restrictive and relieved some of the difficulties the Iraqi people were going through. Speaking of the U.N., none of the resolutions it passed authorized a member state to use force against Iraq. Later in the book Schmierer writes about how trying to democratize Iraq was struggling due to the insurgency and the ethnosectarianism that developed after 2003. The region was also opposed to the elections which gave power to Shiite religious parties so the democratic experiment never spread to the rest of the region.

The real problems with Iraq Policy & Perceptions are in the later chapters which are full of endless ramblings. Here is one example. Schmierer starts off by talking about how partisanship in the U.S. complicated the discussion of Iraq policy. He argues the reason why the Bush administration didn’t want to have public discussions about the possible costs of the war was because it would lead to partisan bickering and perhaps derail the invasion. He goes from that to talking about how after 9/11 security became an overriding concern in the U.S. and State Department. That led to a curtailing of visas which was bad for the U.S. which should encourage foreigners coming to America to learn about the country. He gave an example of Fullbright scholarships as a good way to have people from other nations experience the U.S. That leads to a discussion about a Muslim scholar who was denied entry to the U.S. and how many foreigners are anti-American. Then he goes into the Iraqi elections and how secular Iraqis were upset that religious parties gained power. The chapter finishes with the Iraq Study Group which tried to recommend changes in strategy. It appears that Schmierer believed in a stream of consciousness writing style because literally everything that popped into his head seemed to appear on the page. There is no way you can look at that list of topics and think that it is a cohesive argument about Iraq. This is what most of the book is like which makes it a total and utter train wreck.

Iraq Policy & Perceptions is definitely one of the worst books about the country ever put to print. The author Richard Schmierer couldn’t stay on topic if his life depended on it. His writing is just one idea after another many of which have nothing to do with Iraq. What’s worse was that the author served as a public affairs officer in Iraq. His job was talking to Iraqis and the media about U.S. policy. If he discussed issues like his book every one of his briefings must have been a disaster.