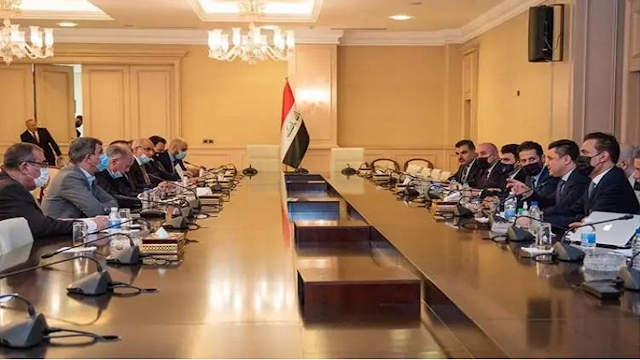 In 2012 the Nouri al-Maliki government filed suit against the KRG for its oil contracts. In 2014 this was expanded to include the region’s independent petroleum exports. It seemed like the case would go nowhere but finally moved ahead in 2018. It wasn’t until February 2022 that the Supreme Court finally said that the KRG’s 2007 Oil and Gas law was unconstitutional, that the Oil Ministry has authority over oil production in the entire country, that the KRG has to hand over all its oil production to the central government, and that Baghdad should audit Kurdistan’s oil and gas sales to determine how much the KRG owes Baghdad. As expected the regional government has rejected the ruling. The Kurds have always claimed the constitution allows it to develop its energy industry, but now the court has spoken on the matter. In Iraqi politics however nothing is certain and rule of law always gives way to politics.

The April talks are the start of a long and drawn out process that will likely lead to little substantive changes. An official from the KRG’s Natural Resource Ministry told Iraq Oil Report that the region doesn’t believe that Baghdad can enforce the court’s decision. The central government has no representatives in Kurdistan that can control oil production or exports or collect revenues. The central government may also not be in favor of a showdown with the Kurds. Both the Abdul Mahdi and Kazmi governments sent monthly budget payments to the KRG despite it not exporting oil for Baghdad as required by the budget. That’s because both prime ministers needed the political support of the Kurdish parties. Moqtada al-Sadr is currently trying to put together a new regime and the Kurdistan Democratic Party (KDP) is a key component of his coalition giving a reason why the next government may not push the matter. That means the negotiations are largely for show.