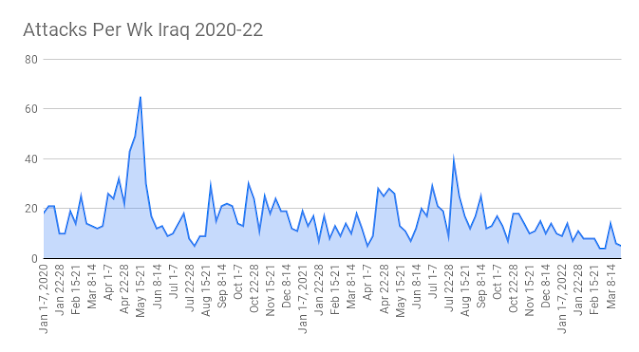 There were only 6 incidents reported in Iraq from March 22-28. One was by a pro-Iran and the other 5 were by the Islamic State. This has been the general state of security in the country for the last 6 months. 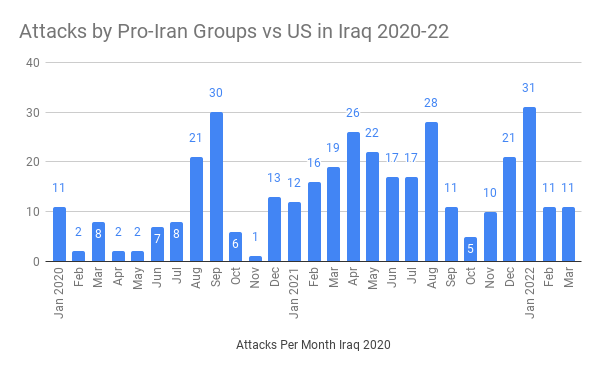 Pro-Iran factions bombed another logistics convoy working for the Americans. This was in Dhi Qar. There have been 11 attacks by these groups in March which matches February’s total. All have been IEDs along with one rocket attack upon Balad Air Base in Salahaddin. It appears that these groups have been distracted by forming the next government which has led to a steady decline in their operations. 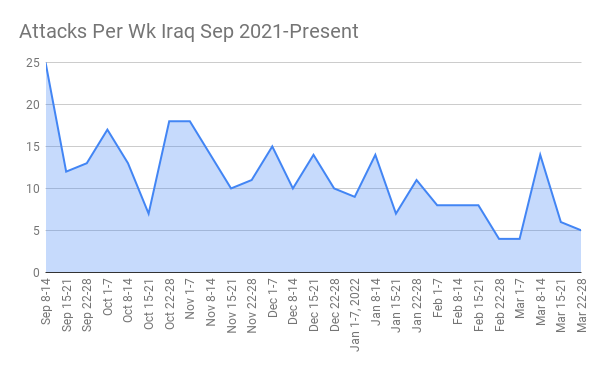 The Islamic State was responsible for just 5 incidents during the week. They did 6 the week before, 15 the second week of March and 4 the 1st week. IS incidents have been in the teens and single digits since September. This accounts for the fewest attacks since 2003.

Those resulted in 7 dead and 4 wounded. 2 soldiers and 5 civilians were killed and 3 more soldiers were injured along with 1 civilian.

Two of the 5 incidents resulted from old bombs going off. That meant there were only 3 actual attacks by IS from March 22-28. In Diyala a checkpoint was shot at and an IED went off outside a house belonging to a member of the security forces. In Kirkuk there was a gun battle with the army that left 2 soldiers dead and 2 wounded. The most gruesome incident was the beheading of four shepherds in Ninewa. As usual these attacks were all in rural areas of the country. They were also all defensive in nature meant to keep people out of their areas. It is another sign that the Islamic State is fading in Iraq.

NINA, "An explosion targeted the house of an officer in the Ministry of Interior in Diyala," 3/27/22

- "An explosion targets a convoy of support for the international coalition in southern Iraq," 3/27/22