Review A Self-Fulfilling Prophecy, The Saudi Struggle For Iraq 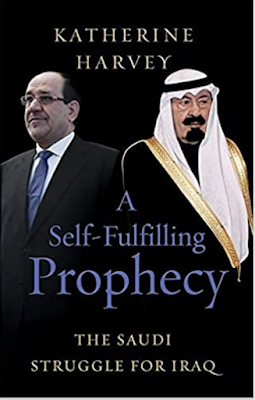 In A Self-Fulfilling Prophecy, The Saudi Struggle For Iraq Katherine Harvey’s thesis is that Saudi King Abdullah created an enemy image of Iraq believing that Prime Minister Nouri al-Maliki was an Iranian agent. Despite repeated efforts by his advisors, the United States, and Iraq, the king never changed his views. This led to a self-fulfilling prophecy as Maliki eventually turned to Iran to stay in power in part because he believed the Saudis were attempting to overthrow him. The book relies upon U.S. reports, the media and extensive interviews and provides a convincing argument in an easily readable format.

King Abdullah formed a negative image of Iran during the Iran-Iraq War and transferred that over to post-Saddam Iraq and then to Prime Minister Maliki. Abdullah and many others amongst the Saudi elite believed that Iran was an expansionist power after its 1979 revolution and was intent upon taking over the Gulf States. That led the king to believe the 2003 invasion of Iraq turned the country over to Tehran. Harvey has example after example of Saudi officials and Abdullah talking about Baghdad being under Iranian influence in public and in private with U.S. officials. When Maliki came to power in 2006 King Abdullah claimed he lied to him although no Saudi, American or Iraqi official the author talked to could ever figure out what exactly the king was talking about. Afterward Abdullah was convinced that the Iraqi PM was an Iranian agent and would hold that view until his death in 2015. This is what Harvey calls an enemy image based upon psychological theories of international relations. It holds what people perceive becomes their reality. Not only that, but King Abdullah refused to ever change his beliefs about Maliki despite years of lobbying by Saudi officials, the U.S. and Iraq.

The second part of the book’s thesis is that King Abdullah’s fears became a self-fulfilling prophecy as PM Maliki eventually did move towards Iran partly because of Saudi Arabia’s policy towards him. Harvey writes that Maliki tried to balance out Iran with Arab countries. At the center of that was reaching out to the Saudis. Other nations eventually opened up to Baghdad, but King Abdullah never budged. Eventually Maliki came to believe that the Saudis were plotting against him when he came in second in the 2010 elections and when the Islamic State seized Mosul in 2014. He came to rely on Iran for support in both situations. Again, Harvey turns to international relations theory about how states can react when they are shunned by another. They can return the disfavor with their own negative image and that’s what Maliki did with the Saudis. That then influences policy. PM Maliki felt like the Saudis had rejected him which helped lead him to Iran as the only regional country willing to help him.

A Self-Fulfilling Prophecy is a good read and makes a strong argument that King Abdullah believed Iran had taken over Iraq after 2003 and that PM Maliki was its agent and rejected all attempts to reconcile with Baghdad as a result. That led Maliki to eventually move towards Iran because he never got the Saudis and other Arab states to back him which would allow him to balance Tehran’s influence. Harvey did an impressive amount of research not only milling through government documents released by Wikileaks and press reports but also did a number of interviews with the major players involved such as Maliki himself. There are plenty of reports and books about Iran’s impact on Iraq partly driven by the U.S.’s own animus towards Tehran, but little has been written about Iraq and the Arab world. A Self-Fulfilling Prophecy starts filling that gap in scholarship.