Review The Shi’is Of Iraq 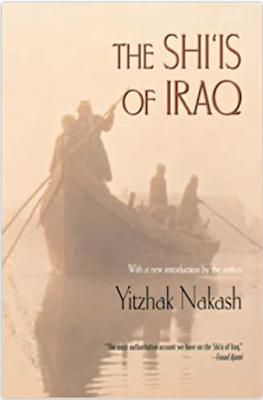 The Shi’is Of Iraq by Yitzhak Nakash has a wealth of information about the development of the Shiite community in Iraq. It discusses how and why the Arab tribes were converted in the 1800s and how the lack of a strong leadership hurt the community once the Iraqi state was established in 1920. The author’s goal was to highlight the uniqueness of Iraq’s Shiites since most studies of the sect only focus upon Iran which had a much different experience. That’s not to mention that until the Iraq War Shiites were largely ignored and unknown in the West so this was a needed addition to the cannon.

The first part of the book is about the conversion of the Arab tribes to Shiism. This did not happen until the 1800s and was due to several different reasons. First was the settlement of the tribes. Ottoman laws encouraged tribes to give up their nomadic lifestyles to increase agricultural production and taxes. A second factor was the emergence of Najaf and Karbala as trade centers which brought people in from the countryside which opened the door to their conversion to Shiism. Third was the attack of Wahabis from Arabia which led the clergy in southern Iraq to push to make tribes followers for protection. Finally, most of the clergy were from Persia and wanted new converts to become their economic base as many lived off of a series of religious taxes and donations. These factors led to a unique Shiite community in Iraq largely based upon Arab tribal culture. The Ottomans, the British and the Iraqi monarchy also sought to limit and control the community. This compared to Iran where people had become Shiite centuries before, became the official religion and was supported by the state. One of Yitzhak’s main goals was to differentiate Iraqi and Iranian Shiites. Here he shows that the two developed at different times and with different circumstances.

The second interesting part of The Shi’is Of Iraq is how Shiites dealt with the creation of Iraq. First, there was a lack of leadership within the community. The clergy was split over whether to support the British, establish an Islamic state or demand the Sharif of Mecca rule the new country. There would be divisions over other issues for decades. Second, the British and then the Iraqi government bought off the Shiite sheikhs. They gave them positions in parliament and let them become the landed elite. Their political and economic desires were more important than any sectarian loyalty. Third, the U.K. and Iraqi monarchy supported Sunni rule and largely excluded Shiites from the government. Initially the prime ministers only appointed one Shiite as the Education Minister. The clergy also hurt their own cause by calling for a boycott of the first parliamentary election, campaigned against sending children to secular schools and issued religious rulings against serving in the civil service. They thought they could leverage those into getting concessions from the monarchy but got nothing. By the 1930s the clergy and the younger generation realized the error of their ways and held protests and issued demands for more representation in the bureaucracy and pushed for an expansion of schools and teachers in southern Iraq. Finally, Baghdad sought to limit religious ceremonies such as pilgrimages and the number of foreign students going to Shiite religious schools to undermine the clergy, as well as neglected developing Najaf and Karbala. This led to a steady decline in the two cities as their finances declined. Nakash’s research is remarkable as he goes through example after example of how the Shiite community struggled with how to adapt to the new Iraqi state. It was constantly going back and forth between protest and cooperation made more difficult by the British and monarchy seeing the clergy as a potential threat to their power. The lack of a strong leader also undermined this effort.

Since the 2003 Iraq War many Westerners have argued that the country has always been divided between Sunnis and Shiites. That’s not the point of Nakash’s book. He notes for instance that young Shiites were enthusiastic about the Iraqi Communist Party in the 1940s-50s, not many followed Ayatollah Ruhollah Khomeini in Iran, and they fought for the Iraqi government during the Iran-Iraq War showing that sect wasn’t always the overriding issue. At the same time, he does point out that at the start of Iraq Shiites were struggling to find their place in the new country and how to ensure their well-being. Nakash’s book therefore goes along with those scholars that believe sect has ebbed and flowed throughout Iraq depending upon the historical situation.