Review A History of Iraq 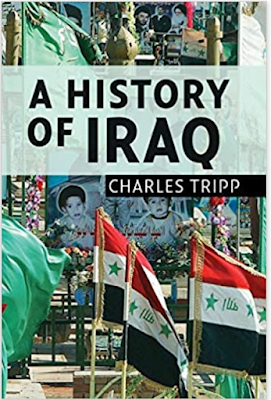 A History Of Iraq by Professor Charles Tripp is one of the seminal histories of Iraq in English. It focuses upon the development of the state and how it affected the country’s people. In doing so, Tripp emphasizes three main themes. One was the autocratic tendencies of Iraq’s leaders who were more concerned about maintaining control than meeting the needs of the public. Second was the system of patronage and clients those rulers created which often times exercised the real power behind the scenes. Last, was the use of violence which was initially used to subdue elements the population and then to seize control of the government.

Autocracy, patrimonialism, and violence were apparent from the creation of Iraq. The British for instance, installed Amir Faisal as the king of Iraq who came from what became Saudi Arabia. With no local connections or popular base he had to create one using the state’s resources, which at the time was land. He dolled that out in patronage networks to draw in former Ottoman officers that served under him during World War I and tribal sheikhs both of which became the country’s new elite and the main supporters of the monarchy. Nuri al-Said was one of these former officers who became the favorite of the British and the Iraqi kings to be prime minister. He was Iraq’s first autocrat fixing elections to make sure he controlled parliament and had no problem imposing martial law, closing the press, banning political parties, and using a heavy dose of coercion and violence against his opponents such as the Iraqi Communist Party and pro-democratic organizations as well. After a series of coups starting in 1936 the military would become the most crucial group to make sure one stayed in office. These trends would be repeated by all the following regimes when Iraq became a real autocracy and continued after 2003 when Iraq was supposed to be moving towards democracy. That simply created a new oligarchy that ruled in the same way as the founders of the state in 1920.

This is the greatest strength of A History of Iraq. Tripp lays out his three elements and then shows how they were adapted by government after government. That culminated in Saddam Hussein who was the personification of all these tendencies. As he points out, his themes are still important to the present day as Iraq’s latest rulers still do not have a wide base and rely upon patronage and violence to maintain power. That’s the reason why the book maintains its standing as one of the three basic histories Iraq enthusiasts should read to understand the country along with Phebe Marr’s The Modern History of Iraq and Marion Farouk-Sluglett and Peter Sluglett’s Iraq Since 1958, From Revolution To Dictatorship.