Review The Gulf Conflict 1990-1991, Diplomacy and War in the New World Order 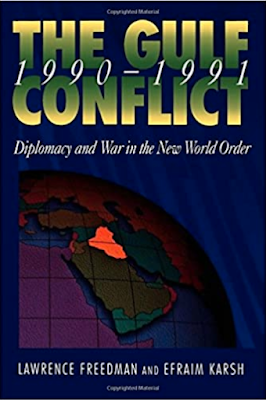 The Gulf Conflict 1990-1991, Diplomacy and War in the New World Order by Lawrence Freedman and Efraim Karsh is one of the most comprehensive books about the Gulf War. Most others on the topic follow the same script. They go over Iraq’s invasion of Kuwait, the U.S. led response, Iraq’s intransigence and then the Gulf War. Freedman and Karsh have that plus the international response from countries like England, France, the Soviet Union and Japan along with all the diplomatic negotiations that led up to the war. If you want to get a complete story of the crisis then The Gulf Conflict should be at the top of your list.

Like others the authors begin with why Saddam Hussein invaded Kuwait in 1990 with a theory that has been proven wrong. Freedman and Karsh argue that Saddam was not an adventurist after the Iran-Iraq War. In fact, he called for political and economic reforms while the U.S. and U.K. were pushing for better relations. Some believe that Saddam was confrontational from the start with his talk about attacking Israel and threats to Kuwait and the UAE. The book believes the opposite that Iraq was dependent upon the West to provide it with credit and trade to rebuild after the war. Instead, they write that it wasn’t until 1990 that Saddam became aggressive because of the dire situation he found himself in. There were repeated coup attempts. The fall of the Eastern Bloc deprived Iraq of major allies. Saddam thought the U.S., U.K. and Israel were plotting against him. His country was running out of money and couldn’t pay for its imports and finally Kuwait and the UAE were driving down oil prices depriving Iraq of millions of dollars. The Baathist archives which were captured after the 2003 invasion show that Saddam never trusted any of the Western countries and always had a conspiratorial mind so the book’s interpretation of events didn’t prove true. Saddam was not going to rely on the U.S. or others to help Iraq get out of its economic dilemma.

The majority of the book then goes through how different countries reacted to the Kuwait invasion. Prime Minister Thatcher for example immediately believed that force was going to be necessary to expel Iraq from Kuwait. Moscow and Paris on the other hand were some of Iraq’s closest allies and constantly tried to find diplomatic ways out of the crisis even during the actual Gulf War. The problem was Saddam was completely intransigent. He demanded that the Palestinian issue be resolved before he would even consider withdrawing from Kuwait as the United Nations demanded. When compromises were offered to him he would shoot them down one after another. The authors go into all of these efforts in great detail. They show that it was not a straight line from Iraq’s invasion of Kuwait to the Gulf Conflict, but that many initiatives were launched and different countries had a variety of views of how to resolve things.

The last part of the book is a military history going through the Gulf War and then the political decision by President Bush not to overthrow Saddam. The most interesting part is that the U.S. Air Force wanted to carry out a strategic bombing campaign like it did against the Axis in World War II and focused upon destroying Iraq’s infrastructure like its electricity grid rather than focusing upon the Iraqi military which was what the U.S. army wanted. Knocking out power plants ended up having no impact upon the Gulf War but devastated the country afterward. The explanation for why Washington didn’t march to Baghdad is in line with other books that regime change was not in line with Bush’s views on the war, not in U.N. resolutions, would have broken up the Coalition, and the White House wanted nothing to do with running Iraq afterwards.

The Gulf Conflict 1990-1991 is one of the best volumes on the Kuwait invasion and its aftermath. It goes through all the elements involved. The fact that it just doesn’t focus on Iraq and the U.S. was welcomed because there was an international response to Saddam’s action and Freedman and Karsh explain all that. Even though authors are off on Saddam’s worldview the rest of the book provides a good history with some insights into how difficult it was to get Iraq out of Kuwait.