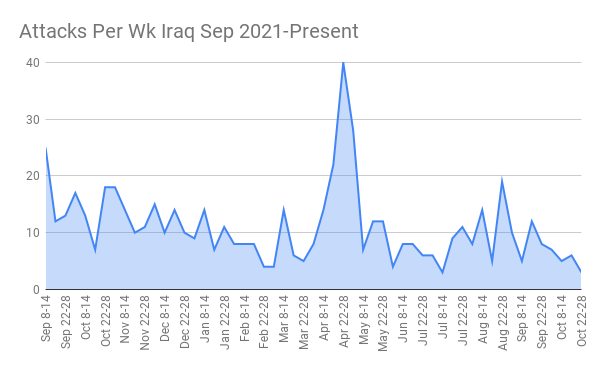 Violence almost disappeared in Iraq during the last week of October. The Islamic State was barely active and there were no incidents by pro-Iran groups.

From October 22-28 there were only 3 security incidents reported in the Iraqi media. They were all by the Islamic State and took place in Diyala, Kirkuk and Ninewa. One of those incidents was an old bomb exploding so there were really only two attacks by IS during the week. This ties for the fewest number of incidents in Iraq for any week since 2003.

Two members of the Iraqi Security Forces (ISF) were killed in Kirkuk and one civilian was wounded in Ninewa.

In Diyala the insurgents fired a mortar at a village. Two soldiers were killed during a security sweep through the Daquq district of southern Kirkuk. Finally, in Ninewa an old IED went off that wounded a civilian.

NINA, "A civilian was injured in an explosive device explosion south of Mosul," 10/24/22