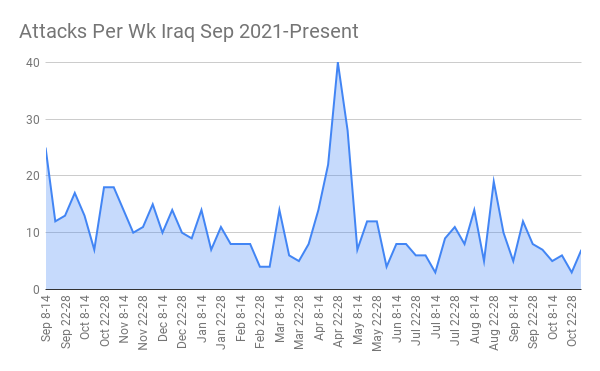 The Islamic State is barely operating in Iraq. For another week incidents were in the single digits.

There were a total of 7 security incidents reported in the media in Iraq from November 1-7. Those happened in Babil (2), Diyala (2), Salahaddin (2), and Sulaymaniya (1). This marked the sixth straight week that incidents were in single digits. For 2022 27 of 41 weeks had single digit attacks.

Those incidents left 1 dead in Diyala and 3 wounded in Babil.

In Babil there were two bombings, one in Hilla and the other in Jurf al-Sakhr. The latter left 3 Hashd al-Shaabi injured. IS often infiltrates into Jurf al-Sakhr in the northeast to attack the Hashd who have turned the district into a large military base. Hilla is nearby.

A shepherd was released by IS after his family paid a ransom in northeast Diyala and there was a shooting that killed a man in the center of the province. Abducting people is one of the main ways the insurgency funds itself.

There were two infiltration attempts by militants in Salahaddin.

Finally in southern Sulaymaniya there was a shootout when a group of IS members were trapped during a security operation.

These are the typical types of incidents that Iraq is seeing in 2022. There are small scale bombings and shootings and infiltration attempts as the militants try to move from province to province. All of them occur in rural, mountainous, and desert areas where there are few people and even less of a government presence.

Out of the seven incidents during the week only the two in Babil were offensive in nature.

- "Three members of the Popular Mobilization were injured in an explosive device explosion north of Hilla," 11/4/22