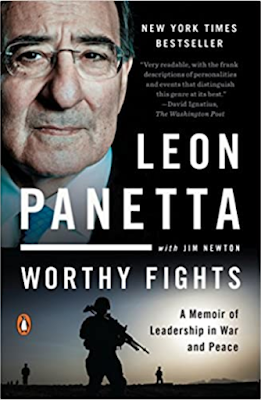 Worthy Fights is an autobiography of Leon Panetta written by the Los Angeles Times’ Jim Newton. Panetta went from a Congressman specializing in the budget to heading budget matters with the Clinton administration to President Clinton’s chief of staff to the CIA director and Defense Secretary under President Obama.

The book has four main themes. The first is finances as that’s what Panetta originally focused upon. That concern would start when he was elected to Congress and continue until he was the Secretary of Defense. He gives all kinds of little insights such as why across the board spending cuts didn’t make any sense to him. Second was Panetta’s personal politics. He began as a moderate Republican who was fiscally conservative but socially liberal. He was inspired to join the party by President Eisenhower. When the party went to the right with Barry Goldwater, Ronald Reagan and Richard Nixon Panetta became a Democrat. He constantly notes how the conservative wing of the Republicans made moderates take up issues they didn’t really believe in to win primaries. That part of the party would take over Congress with Newt Gingrich who Panetta thought was a media whore who would make up stories simply to get into the news and draw attention to himself. Third, Panetta begins his book with a story of a CIA officer who was killed by an Al Qaeda double agent in Afghanistan. Her death is portrayed in the movie Zero Dark Thirty. Al Qaeda would become Panetta’s dominant concern when he headed the Central Intelligence Agency. He devotes an entire chapter to the killing of bin Laden. That was one of his proudest moments of his entire career. Last, Panetta also had to deal with the war in Afghanistan as both CIA director and Defense Secretary. He was for a moderate war policy that wanted to create an Afghan government that could stand on its own while carrying out a largely counter-terrorism mission.  Worthy Fights is full of stories about these events and others. Those prove very engaging and keeps the reader’s attention from start to finish as Panetta is obviously able to give an insider’s view.

Panetta was also the Secretary of Defense when the United States withdrew its forces from Iraq. This is largely a side issue in the book consisting of only about four pages total. Panetta believed that the U.S. should have kept a stay behind force after the 2011 withdrawal. He thought that would be necessary to help maintain security and stability in the country. The State and Defense Departments were trying to achieve that but Obama did not support or lead the effort because he wanted to put Iraq behind him. The Secretary was disappointed that this did not work out and argued that the U.S. could have helped fight the Islamic State and lesson the sectarian violence that escalated after the Americans left. Others have recounted the same set of details. President Obama was partly elected because of his opposition to the Iraqi War and his main concern was getting out. He therefore put in a half-hearted effort to convince Baghdad to allow some troops to stay. As Panetta noted things eventually deteriorated leading to the war versus the Islamic State in 2014.

Worthy Fights is an enjoyable read because of Panetta’s personality and the plethora of tales he weaves about his long career in politics.