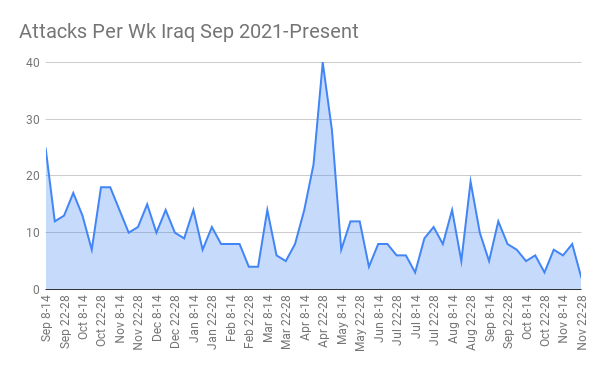 Iraq witnessed a new low in violence the third week of November. There were only two incidents reported in the press, both by the Islamic State. The previous low was 3 incidents a week which happened twice in 2022.

The two incidents took place in Diyala where an infiltration attempt by IS members was turned back in the Khanaqin district in the northeast and Salahaddin where a Hashd member died of his wounds after an assassination attempt in Tuz Kharmato in the east.

The insurgency in Iraq has been in a tailspin downwards for the last several years. At its current state it is having little to no impact upon Iraq overall because the militants are isolated in rural areas where there are few people and even little government presence. It can continue in this environment for decades but it is now irrelevant.

Shafaq News, "A member of the crowd died from the wounds of an assassination attack in Salahaddin," 10/28/22