Violence has been dropping in Iraq since the Islamic State’s annual summer offensive ended. October saw the lowest monthly incident total since 2003.

There were a total of 28 security incidents recorded in Iraq in October. The previous month there were 41. 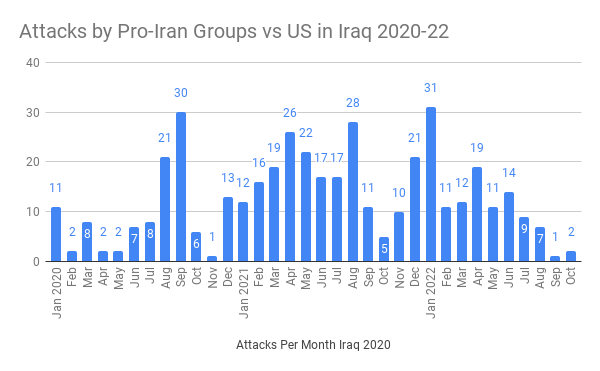 There were 2 attacks by pro-Iran groups and 3 by Sadrists in October. In Ninewa Hashd factions fired rockets at a Turkish military base in the north that has become a favorite target. Missiles were also launched at the Khor Mor gas field in Sulaymaniya. That was likely a political message to the Patriotic Union of Kurdistan that runs the province to stay with the Coordination Framework in government talks. Sadrists also shot rockets at the Green Zone twice in October to protest the Framework’s moves to pick the next prime minister. One of those attacks left 10 civilians wounded. They also got into a gun battle with the Hashd in Basra city that involved missiles being launched at the presidential palace that killed 2 and wounded 10.

That just left 23 incidents by the Islamic State. The month before there were 37. The previous monthly low for IS activity was 26 in June. Before that it was 28 in February. Those all point to the dramatic decline in the insurgency which is barely holding on in Iraq.

They left 15 dead and 25 wounded. 1 Hashd al-Shaabi, 2 Peshmerga, 6 members of the Iraqi Security Forces (ISF) and 6 civilians were killed and 2 Peshmerga, 7 civilians 8 Hashd, and 8 ISF were injured.

During the first week of October there were 7 IS incidents only one of which was offensive in Baghdad. During the second week there were 5 attacks, 1 of which was offensive in Baghdad. The third week of October there were 6 incidents 3 of which were offensive, 1 in Baghdad, 1 in Diyala and 1 in Sulaymaniya. The fourth week there were just 3 incidents none of which were offensive. The same was true for the last 3 days of the month. That was a total of 5 offensive attacks out of 23. The other 18 were meant to keep people and the government out of IS areas. None of these were in cities again pointing to the drop in IS activity which is limited to sparsely populated rural areas of the country.

Buratha News, “Security sources: 12 were killed or wounded by the terrorist gangs that attacked the presidential palaces,” 10/4/22

NINA, "The Presidential Palaces in Basra Subjected to a Missile Attack," 10/3/22