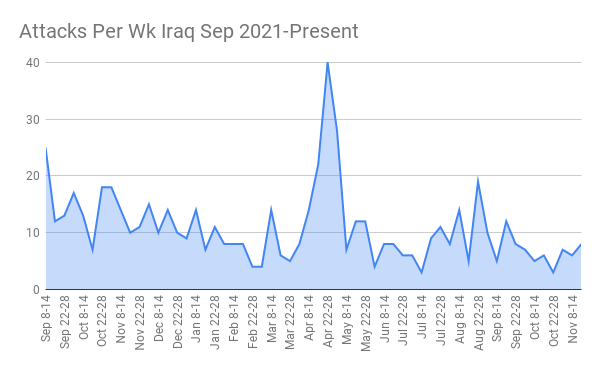 For the 6th straight week security incidents in Iraq were in single digits. There were 8 incidents from November 15-21 all by the Islamic State. That was up from 6 the second week of the month and 7 the 1st week. For 29 of 43 weeks incidents have been in single digits in 2022.

IS incidents took place in Diyala (6), Kirkuk (1), and Ninewa (1). They left 7 dead, 1 civilian, 2 Hashd al-Shaabi, and 4 members of the Iraqi Security Forces (ISF), and 17 wounded, 2 civilians and 15 Hashd. Diyala had the most casualties with 18. The other two provinces were in single digits.

There were 6 incidents in Diyala. Four of those occurred on November 19. A civilian was assassinated, a checkpoint was attacked, there was a gun battle during a Hashd security sweep that left 1 Hashd dead and 6 wounded, and 3 IEDs went off. One of those bombs killed 1 Hashd and injured 8 others. One of those incidents was in the Hamrin mountains in the northwest while the rest were in the Muqdadiya and Khanaqin districts in the center and northeast respectively. The Hamrin area has been a long time IS base and acts as a way station between Salahaddin and Diyala, while Muqdadiya and Khanaqin are the main IS areas in Iraq.

4 soldiers were killed in an assault upon a checkpoint in Kirkuk and 2 civilians were injured in southern Ninewa by a bomb.

None of the 8 incidents during the week were offensive. All were aimed at keeping out government forces and civilians from IS domains and subduing the residents.

- "The Popular Mobilization responds to a terrorist attack in Diyala," 11/21/22

- "In Diyala, a civilian was assassinated, and a Souta driver was injured in two separate accidents," 11/17/22