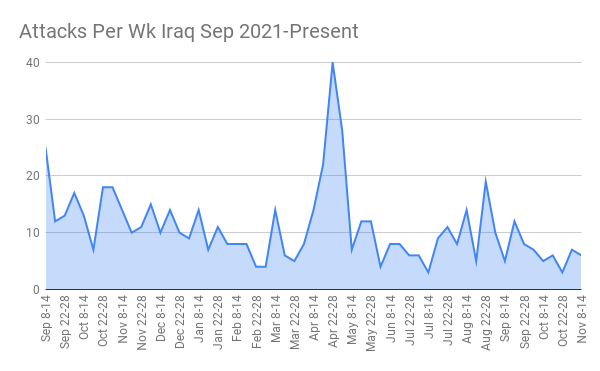 Violence in Iraq remains at a very low level as it has been throughout 2022. There were only 7 incidents from November 8-14 and all were by the Islamic State. This was the seventh week in a row and the 28th of 41 weeks this year when incidents were in single digits.

IS attacks were in Baghdad (1), Diyala (1), Ninewa (1), and Salahaddin (3). They resulted in 1 civilian death and 1 civilian and 7 Hashd al-Shaabi being wounded.

In Baghdad there was an infiltration attempt by insurgents in the Tarmiya district in the north. Almost all the incidents in the province are in this area.

A civilian was assassinated in Diyala and an IED wounded a civilian in southern Ninewa. In Salahaddin a member of the Hashd al-Shaabi was shot and there were two IEDs that left a total of 6 Hashd injured.

The shooting in Salahaddin appeared to be the only offensive operation in Iraq out of the 6 incidents. As usual most IS attacks are aimed at keeping people and the government out of their areas which are limited to rural, mountainous, and desert regions of the country.

NINA, "A civilian assassinated inside his guesthouse in Diyala," 11/12/22

- "Four fighters of the Popular Mobilization were wounded by an explosive device explosion on Salah al-Din Island," 11/13/22

- "A member of the Popular Mobilization was wounded in an armed attack in the Tuz district," 11/11/22

Shafaq news, "The crowd kills an ISIS terrorist by thwarting an infiltration attempt by ISIS members north of Baghdad," 11/10/22