Review Days Of Fire, Bush and Cheney in the White House 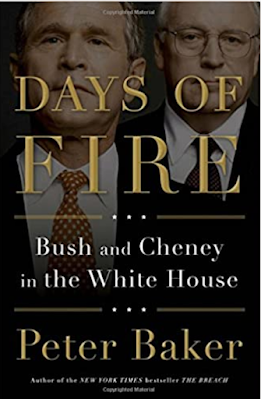 Peter Baker wrote Days Of Fire, Bush and Cheney in the White House to refute the idea that Vice President Dick Cheney was the driving force behind President George Bush. Baker argues that the two largely agreed about issues during the first administration but then drifted apart in the second. The Iraq War was an example of their relationship since both individuals wanted to overthrow Saddam Hussein. The author also pointed out how badly the war was handled by the White House.

Bush and Cheney agreed that Iraq should be a leading foreign policy issue but they disagreed on timing and tactics. For instance, British Prime Minister Tony Blair convinced Bush to go to the United Nations to get a new resolution returning weapons inspectors to Iraq to help justify the war. Cheney thought that was a waste of time and would only delay the invasion. The vice president even gave two speeches saying inspections were useless. Bush would eventually agree with Cheney on the issue however. Bush in fact, talked about the threat of Iraq before Cheney did. On 9/11 for instance the president immediately thought Saddam Hussein was involved and rejected several reports that said he wasn’t. This was Baker’s main argument that the two agreed on most things during the first term.

More important than that Days Of Fire documented how Bush mismanaged the Iraq War. The president’s approach was to let his people in Iraq determine the policy and he would support them in the U.S. When Jay Garner the first administrator of postwar Iraq advocated for maintaining the Iraqi military to help rebuild the country and wanted a short transition to Iraqi control Bush okayed it. Then in a few months later when Paul Bremer was put in charge, he disbanded the army and said he would need 2-3 years before sovereignty could be returned to Iraq Bush said yes finding no contradiction in making a 180 degree turn. Later when the insurgency grew and Iraq fell into civil war Bush supported the U.S. commander General George Casey who wanted to turn over responsibilities to the Iraqi so the U.S. could withdraw. The president didn’t even know it was a withdrawal policy. The result was the U.S. never had a strategy to win in Iraq even though Bush only talked about victory and condemned calls to pull out U.S. troops. The Iraq war was the biggest decision of his presidency but the book shows how he was not involved in it afterward.

Baker presented two examples of how Bush was disconnected from what was going on. In 2004 as Bremer was preparing to leave Iraq he said the U.S. needed 40,000 more troops. Rather than discussing whether more American forces were needed Bush and his staff talked about how Bremer could be ignored because he would be gone soon and he didn’t follow the chain of command. In 2006 National Security Council aides set up a two day conference to discuss changing Iraq policy. Bush attended the first day and then left for a secret trip to Iraq on the second where he re-affirmed his support for General Casey’s plan. It wasn’t until the summer of 2006 that Bush requested daily briefings on the war, and not until December that he finally changed paths and ordered a troop surge. As the biggest issue of the Bush administration the book constantly discussed how Iraq got worse and worse because of the presidency. For the first couple years he didn’t know what was happening on the ground, and then when he did it took him six months to decide on a different strategy. Bush called himself the decider and chief but he proved to be the exact opposite on Iraq.

Days of Fire deals with many other issues like the War on Terror, tax cuts, No Child Left Behind, North Korea and Katrina, but Iraq was covered from start to finish because it was such an important event during the Bush White House. It showed that Cheney supported Bush and didn’t lead him. It also highlighted that Bush’s style of delegating and supporting his subordinates could lead to chaos which Iraq descended into. It was what Bush became known for and was why the Republicans lost the presidency in 2009. Bush came into office saying he wanted a new kind of compassionate conservatism. He left being known for a war he almost lost because of his lack of leadership.