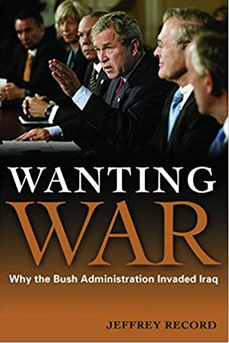 It’s odd that 15 years after the Iraq war there is still discussion about what caused it. Was it the weapons of mass destruction, the oil, neoconservatives, or other factors? Much of that is due to the Bush administration whose stated goals WMD and Iraq’s connection to Al Qaeda both proved to be based upon a house of cards. Jeffrey Record’s Wanting War: Why the Bush Administration Invaded Iraq is one of the best attempts to answer the question of why the U.S. invaded Iraq. Rather than having a grand strategy, Record found that there was a confluence of different personalities and ideas within the White House that all converged on Iraq. These were roughly divided into two main camps, neoconservatives that wanted to spread democracy via overthrowing Saddam Hussein and others that wanted to maintain the supremacy of the United States in the world after 9/11.


Neoconservatives were one main constituency within and without the Bush administration that had been pushing for the removal of Saddam since the end of the Gulf War. In the White House followers of these ideas included Deputy Secretary of Defense Paul Wolfowitz, Undersecretary of Defense for Policy Douglas Feith, and Bush’s speech writer David Frum took up many of the group’s ideas. In Washington D.C., there was the American Enterprise Institute, the Weekly Standard, The National Interest, Commentary and the New Republic that were all committed to lobbying the government and the public for war with Iraq. They argued that the war on terror should not be about terrorism, but the U.S. employing its power to transform the world. This was based upon the belief that regime change in Iraq could start the transformation of the Middle East towards a democratic future. This could be achieved via pre-emptive war, regime change, exporting democracy, and the unapologetic use of military force. Together this was an ideological justification for the invasion of Iraq, and came to shape White House policy and speeches by President Bush.

There were other powerful figures within the administration who were not neoconservatives, but also advocated for overthrowing Saddam. They were interested in showing American power to the world after 9/11. They didn’t believe that Afghanistan was enough to prove that the United States was still strong after the terrorist attacks. They wanted a much larger sign of strength, and that became Iraq. Vice President Dick Cheney and Secretary of Defense Donald Rumsfeld were in this camp. After 9/11 for instance, Rumsfeld complained there were not enough good targets in Afghanistan, and Iraq should be bombed instead. That showed that the Defense Secretary considered hitting Baghdad much more important than Kabul.

Together, these two groups came up with a justification for the war, but could not agree on what would happen afterward, which proved to be a much bigger issue and led to years of instability in Iraq. First, the administration officials converged on the argument that Iraq’s weapons of mass destruction, its ties to terrorism, and the fact that Saddam remained in power in defiance of the United States were all reasons for the invasion. In the aftermath of 9/11, this proved an effective policy as the public was afraid of another attack, and easily bought the White House’s claims that Iraq was connected to Al Qaeda and was therefore an imminent threat. However, the differences between the two meant there was no coherent postwar policy for Iraq. For example, the government never consulted with Iraq experts or formed organizations to build democracy in Iraq. Instead, some believed that it would organically spring from within Iraq as a basic desire of humanity. Postwar Iraq was also turned over to the Pentagon under Rumsfeld who did not care about democracy. Ironically, when no WMD were found, President Bush would push democratization as the main reason why the U.S. was committed to Iraq, but there was no actual policy from Washington on how to achieve that. Even if there was, the U.S. decision to constantly interchange postwar staffs from the Office of Reconstruction and Humanitarian Assistance to the Coalition Provisional Authority to Ambassador John Negroponte to Ambassador Zalmay Khalizad over the span of just two years meant the only thing consistent about Iraq policy was its constant change. The lack of a grand strategy at the start meant there was none to be had after the invasion, and that would come to plague the United States to the great detriment of Iraq and its people who suffered the consequences. Record’s book is a quick and easy read on how these divergent ideas led to the 2003 invasion of Iraq.