Security in Iraq has been stable for the last five months. While the overall numbers have stayed steady during that period there are vast differences between the six provinces where most of the violence takes place. In Anbar for instance, there is barely any insurgent activity, but in Baghdad and Kirkuk there has been a sharp increase in the last two months. Diyala and Salahaddin are in the middle with incidents going up and down, while in Ninewa things have leveled off.

Since October 2017 there has been roughly the same number of incidents each month. In October, there were an average of 9.2 incidents per day, followed by 9.8 in November, 8.4 in December, 9.6 in January 2018, and 8.7 in February. This is the lowest level of violence Iraq has seen since 2003 when there was an average of 10 incidents per day in the months right after the invasion. This is also important because the current plateau started before victory versus the Islamic State was declared in December. Even before it lost the last piece of territory in Iraq, the group had largely given up set battles against the Iraqi forces and were retreating to conserve what it had left and start the rebuilding process and transition to insurgency and terrorism. 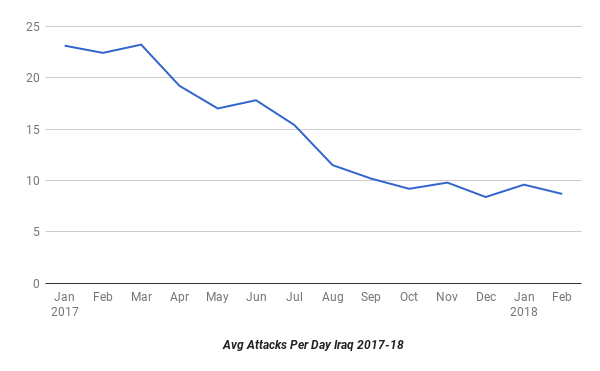 Casualties In Iraq By Province Jan-Feb 2018

In Anbar, incidents have fallen off sharply since September 2017. In that month, there were an average of 1.3 incidents per day. That went down to 1.0 in October, 0.8 in November, 0.4 in December, 0.3 in January and 0.4 in February. Towards the end of 2017 most of those incidents were spread across the western and central sections of the province. The west was one of the last areas of Iraq that the Islamic State held, while it still had cells in the Fallujah-Ramadi corridor. In the new year however, most of the attacks happen in the middle of the governorate. In February, there were just 12 incidents, but that did include a suicide bombing in Ramadi, and four more bombers that were killed in the Hit district. For now, it appears that the province is relatively stable, and the shift in incidents to the middle shows there is little activity in the desert regions of along the Syrian border. 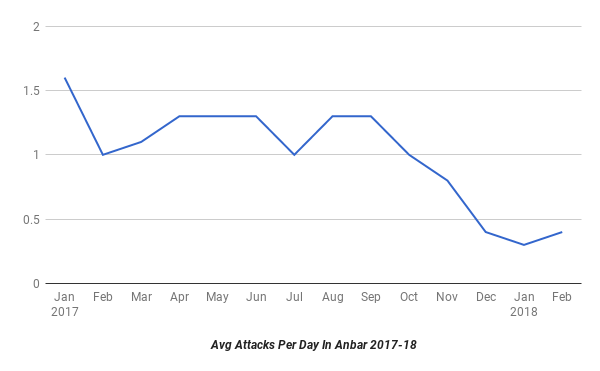 The insurgency in Babil has shifted once again. Starting in the spring of 2017 violence steadily picked up with an attack nearly every other day. There was an average of 0.1 incidents per day in May going up to 0.4 per day from August to October before going down every month after that. In 2018, there were 10 incidents in January down to just 2 in February. It seemed like IS was re-establishing its presence in the northwest section of the province consistently hitting Jurf al-Sakhr especially going after the Hashd that are based there. Now that does not appear to be a priority. 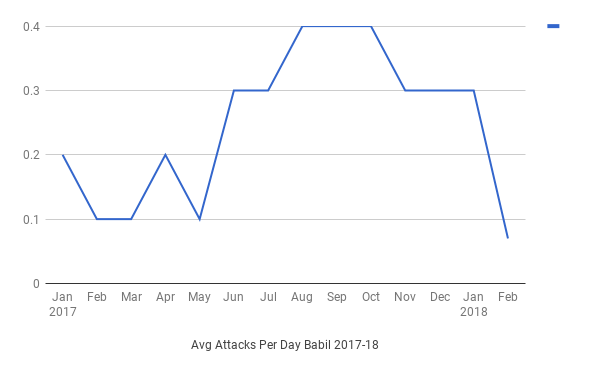 Baghdad is one of the areas where IS has picked up its operations. In December, there were 2.1 incidents per day, but that went up to 3.3 in January and 3.1 in February. Most of those were a steady diet of IEDs with roughly half aimed at shops and markets looking to cause as many casualties as possible. More importantly, attempts at mass casualty bombings are back with 3 suicide bombings in January with another 3 killed, and a suicide bomber killed and a car bomb dismantled in February. Another worrying trend is the militants have been able to reach the center of the city, something that had not happened for some weeks. The vehicle bomb for instance, was discovered in the Karrada district right in the middle of the capital. The province has always been IS’s main terrorist target. The uptick in attacks in the last two months therefore is a worrying development. 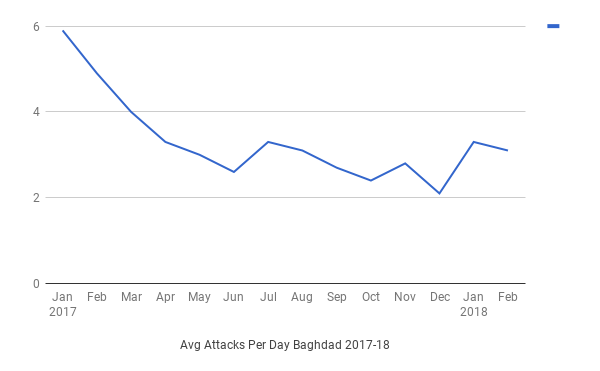 Security in Diyala continued to fluctuate. Since 2016 incidents have gone up and down. Most recently, in October 2017 there were just 0.6 incidents per day, but that increased to 1.8 by January 2018 only to recede to 1.0 in February. What’s important is that these attacks are distributed throughout all parts of the governorate showing that the insurgents have freedom of movement in Diyala. Since the start of the year the security forces have launched 10 different operations to try to stem IS’s presence, but none have been successful. 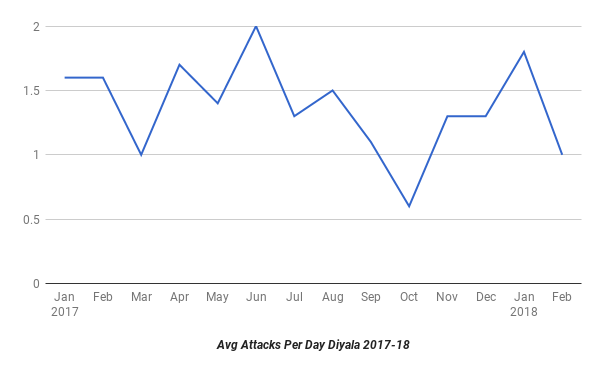 Since the federal government took over control of Kirkuk security has worsened. From January to September there were just under one incident per day. That passed 1 incident per day since October with 1.7 in February. That was topped off by IS ambushing a Hashd unit and killing 27 of them in the Hawija district. This has been due to several factors. First, most of the insurgents fled Hawija rather than put up a fight when it was liberated at the end of last year. Those elements apparently hid and are now back at work. Second, most of the federal forces are concentrated in Kirkuk city, leaving rural areas like Hawija with only a light presence. Even then, nearly one third of the incidents each week are inside the city showing gaps even there. Third, Iraq Oil Report talked with a security official who said that the Iraqi forces are bereft of good intelligence, especially when compared to the insurgents. 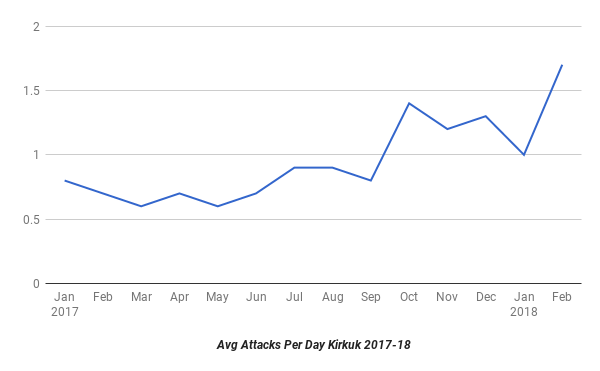 The low-level war between Turkey and the PKK continued in Kurdistan in February. The PKK ambushed a Turkish army patrol killing two soldiers and wounding two others. That same day, Turkish planes killed 49 PKK fighters. It had been years since the PKK decided to fight the Turks within Iraq, but that has changed over the last several weeks in response to increased activity by Ankara including regular shelling and bombings of PKK areas.

Ninewa is a bit of a paradox. While the number of incidents is dramatically lower since the completion of the Battle of Mosul there is still more violence there than most of the rest of the country. In September, there were 2.1 incidents per day. Since December that has gone down to around 1 per day. At the same time, the governorate had the third most incidents in January and February. Those mostly happen in the west along the Syrian border and south of Mosul, with a few within the city as well. 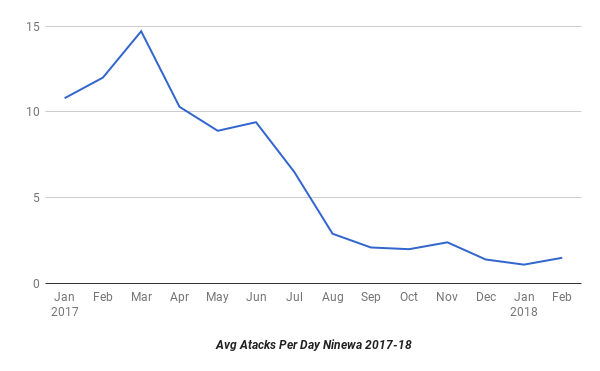 Finally, Salahaddin has been another governorate witnessing an ebb and flow in violence. In September 2017, there was an average of 1 incident per day, going down to 0.6-0.7 from October to December before going back up to 1 per day in January, and then down to 0.6 in February. The types of attacks have also changed month to month. In January for example, there was a car bombing and 13 suicide bombers were killed or arrested. In February, there were just shootings, IEDs and a sticky bomb. It seems that IS fighters are constantly moving back and forth along the Diyala-Salahaddin border, and perhaps working on building up their cells interspersed with spurts of attacks. 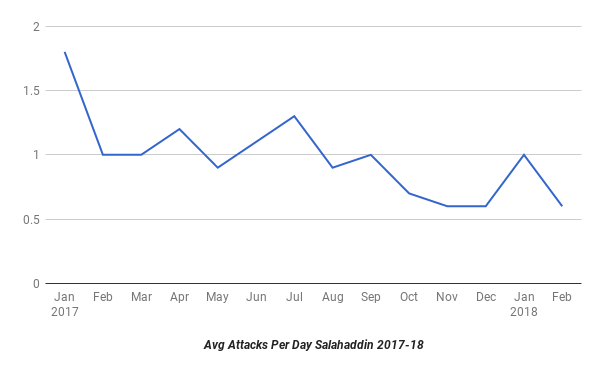 Al Forat, "URGENT Security source: the dismantling of a car bomb in Karrada," 2/9/18

Al Maalomah, "Crowd finds a mass grave containing the remains of 20 civilians between Karfi and al-Tuz," 2/7/18