Review Cobra II, The Inside Story of the Invasion and Occupation of Iraq

Gordon, Michael and Trainor, General Bernard, Cobra II, The Inside Story of the Invasion and Occupation of Iraq, New York: Vintage Books, 2007 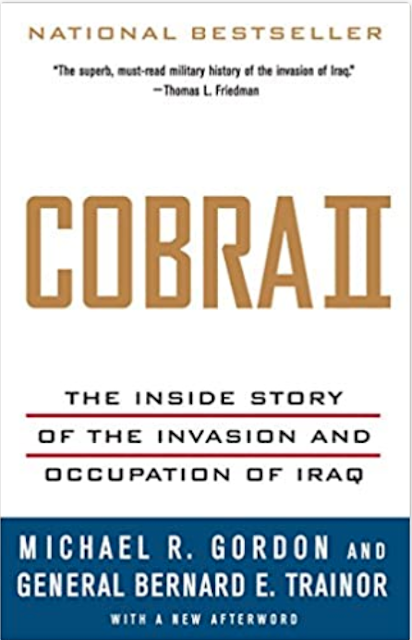 Cobra II, The Inside Story of the Invasion and Occupation of Iraq by New York Times journalist Michael Gordon and former General Bernard Trainor is about the invasion of Iraq and the immediate aftermath. It is a traditional account of those events documenting how the U.S. focused upon overthrowing Saddam at the expense of planning for the aftermath. That led to instability and civil war in Iraq. It also makes the common argument that if the U.S. had only made better decisions like sending more troops Iraq could have worked out.

There are three parts to the book. The first is about the planning for the Iraq war. The vast majority of Cobra II is a blow by blow account of the invasion that provides a few insights like the pause in the invasion wasn’t due to a sandstorm as others have claimed but rather because the ground forces commander General David McKiernan wanted to secure the south which was plagued by Saddam’s Fedayeen which threatened U.S. supply lines. The first foray into Baghdad called the Thunder Run was also much more harrowing then many portrayed with one crisis after another as tanks, vehicles and personnel were lost. It was so intense the U.S. unit did not want to do another one. The end is about the U.S. occupation from the short lived Office of Reconstruction and Humanitarian Assistance to the start of the Coalition Provisional Authority which were the civilian organizations created to run Iraq.

At the end Gordon and Trainor believed that the U.S. committed a number of blunders in Iraq which led to the insurgency and instability. First, the U.S. only thought about the Republican Guard and ignored what turned out to be the main foe in 2003 the Fedayeen. Second Defense Secretary Donald Rumsfeld was obsessed with transforming the U.S. military into a one centered around small and speedy forces using technology. That proved deadly during the invasion but completely the opposite of what was needed for securing the country afterward. Third, the Americans constantly ignored the situation on the ground and was committed to its plan which called for an early withdrawal as soon as the invasion was over. Finally, the Bush administration came into office opposed to nation building because that was a Clinton policy. It was nation building the U.S. found itself doing in Iraq. This is not much different from most Western accounts of the war. The U.S. didn’t make the right decisions but if it did things could have been much different. The underlying assumptions this is based upon are never questioned. For instance, sending more troops who were trained for conventional warfare would not necessarily help with law and order which was the first priority in Iraq after the invasion. Some units like the 4th Infantry Division which came after the invasion believed Iraqis only understood force which made the situation worse. The army and marines were not prepared for police duties and had discarded counterinsurgency after Vietnam which challenges a common idea that more troops would have been a solution for postwar Iraq’s problems.

Michael Gordon and General Bernard Trainor provide one of the better accounts of the U.S. invasion. It also deals with the major shortcomings in U.S. planning like largely ignoring the postwar situation. At the same time, the overall story and analysis is the same as many other books. It would be a good starting point for someone looking into the Iraq war, but if they were already familiar with the conflict there may not be much new to be found in Cobra II.