Review Republic Of Fear, The Politics of Modern Iraq 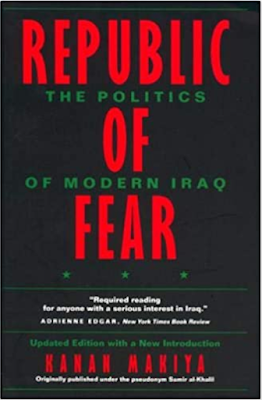 Originally released in 1989 Kanan Makiya’s Republic of Fear, The Politics of Modern Iraq was a huge hit in the West as a diatribe against the rule of Saddam Hussein. The front cover has a blurb from the New York Times Book Review saying it was “required reading” to understand Iraq. Subsequent histories of the country would often cite this work. What people usually said about it however and what it was actually about are very different. Republic of Fear was not focusing upon the crimes of Saddam through murder, torture and imprisonment although it starts with that, but was actually an argument against Baathist ideology. Makiya argued that the problems with Iraq started with pan-Arabism and Baathism which led to Saddam but his thesis was deeply flawed and full of major problems.

Republic of Fear begins with the crimes of Saddam’s regime. He writes that the Baath created a new kind of police state as soon as it seized power in a coup in 1968. Soon security agencies proliferated that created a culture of fear which permeated throughout society. Makiya includes stories about people informing on each other, torture and more. This is what made the book famous. In 1989 very few in the West knew anything about Iraq so this was their first introduction to the dictatorship of Saddam Hussein. Only the very start of the book is about this however. Subsequent histories have found this argument incomplete. Iraq was not run only through intimidation. It actually included many carrots along with the sticks. There were rewards for service, for fighting in the military, for being a Baath Party member, etc. which were incentives to follow the government along with all the abuses. Makiya actually mentions this a very few times but it would’ve undermined his argument if he did it more often.

The book gets basic facts wrong and Makiya contradicts himself many times. For instance, he writes that when the Baath came into office in 1968 they were weak and small. They had to contend with the Kurds in the north who’d been rebelling against the government for decades and President Ahmed Hassan al-Bakr tried to negotiate an autonomy agreement with them to stabilize his rule. The Iraqi Communist Party was also the largest group in the country and a direct rival of the Baath. Bakr eventually got them to agree to join a national unity government by the early 1970s. Eventually the Kurds were defeated militarily in 1975 and in 1976 Bakr turned on the Communists and purged them from the administration and imprisoned and killed its followers. How could a republic of fear be immediately established in 1968 if the Kurds and Communists were still active until 1976? If Bakr’s government was nothing but repression from the very start why weren’t the Kurds and Communists wiped out immediately?

What the vast majority of Makiya’s book is actually about is using Western philosophy to argue that pan-Arabism and Baathist ideology was flawed and a failure. The author goes through Arab nationalist writers in Iraq in the 1920s and 30s when the country was first created, Michel Aflaq the Syrian founder of the Baath Party, Iraqi Baathist members, and Saddam. Makiya brings up Western thinkers like Hegel, Hobbes and others to use against these ideas. His argument is that pan-Arabism led to Baathism and the Iraqi Baath party that came to run the country in 1968 which eventually gave way to Saddam Hussein. That makes sense on paper, but the truth of the matter is that Saddam was not a Baathist ideologue. In fact, he was a street tough and enforcer in the party before moving up the ranks and becoming the president in 1979. His rule was all about concentrating power around himself not following Baathist dictates. The author left Iraq in the 1960s before the Baath seized the reins of the country and didn’t seem to understand how the country was run. He was also an intellectual so when tackling Saddam he wanted to confront what he thought were Saddam’s ideas which he believed were based upon Baathism when they weren’t. This would be like a contemporary writer criticizing the Chinese government by focusing upon Mao’s little red book and claiming China’s President Xi Jinping was a committed Maoist and that’s where all his mistakes came from when the current regime in Beijing has nothing to do with Mao anymore.

More needs to be said about how Makiya misconstrued Iraqi history. The author calls the British Mandate from 1920-32 the best period in Iraqi history because he said there was total freedom. He said that Iraqis secretly looked up to the English because they were orderly and the Arabs were not. He continues that the British were more modernizers than colonizers but the Iraqis weren’t ready and came to oppose the UK as imperialists which fed into pan-Arabists who were against developing the country because they believed in an idealized past of Arab unity. The British ran the Iraqi government, created a semi-feudal economic system in agriculture, cracked down on any dissent to its rule and led to the 1920 Revolt where most of the country rose up against the UK but somehow this time was all about freedom and modernity. What Makiya ends up advocating for is the White Man’s Burden. He does no better in other areas like when he says Saddam ran the Baath party in 1964 when he was just a street enforcer or that President Bakr was a figurehead the entire time which is also false. Another time he writes that when the Baath brought women into schools and university and allowed them to get jobs in the government and professions in the 1970s was actually bad because they were better off in traditional families. His reasoning was that everything the Baath did was evil so even advancements for the people had to be condemned.

Makiya’s style makes it easy to understand why Republic of Fear was so well received in the West. Not only was he against Saddam but he also opposed pan-Arabism and anti-imperialists who criticized Europe and America. He was also an intellectual who used famous Western philosophers which appealed to newspapers and elites. Additionally in 1989 very few Westerners knew anything about Iraq so this was their introduction to the country. They had nothing to compare it with. Reading it today and it’s a disaster. Not only did Makiya not know Iraqi history but made ridiculous twists to it to fit his diatribe. Most importantly he completely misunderstood the nature of Saddam’s rule. Makiya believed that Saddam followed Baathist ideology when he only used it if it served himself.