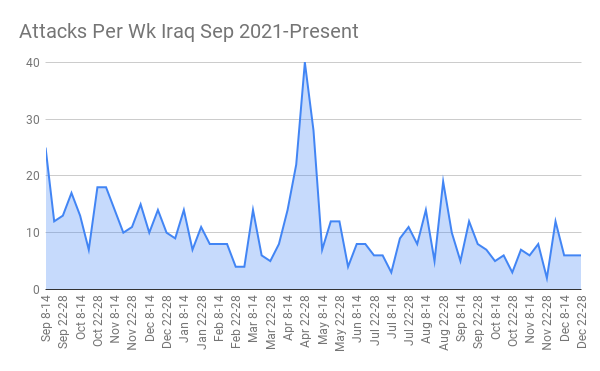 Violence in Iraq remains at an all-time low. For the third straight week attacks by the Islamic State were in single digits. After a spike in casualties during the last week they were back to normal the fourth week of December. Despite recent press reports this shows that the insurgency is barely surviving in Iraq.

There were a total of 6 security incidents in Iraq from December 22-28. There have been six incidents per week for the last three weeks. Overall, 33 of the 48 weeks of the year have witnessed single digit totals for attacks.

A suicide bomber was arrested and a village attacked in Diyala. There were two exchanges of gunfire in Kirkuk. In Ninewa a child was wounded by an old IED and in Salahaddin an infiltration attempt was foiled by the security forces. That meant there were only 5 actual attacks during the week.

They resulted in 4 wounded, 1 civilian and 3 police in Ninewa and Salahaddin respectively. The previous week there were 44 dead and injured due to two high casualty incidents.

Of the 6 incidents during the week only one was offensive when the village was attacked in Diyala. That is typical of the group which seeks to maintain control of its areas.

Buratha News, "An officer and two security members were injured in an armed attack in Kirkuk," 12/22/22

- "An officer and a security member were injured in the armed attack that targeted one of the entrances to the city of Kirkuk / Expanded," 12/22/22

- "The popular crowd thwarts an attempt to infiltrate the city of Samarra," 12/23/22