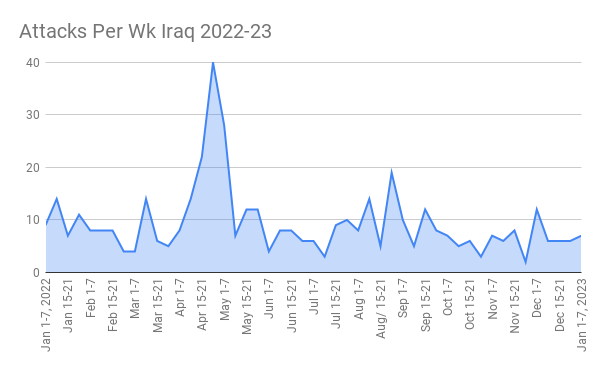 The new year started off just like how it ended. That was with little Islamic State activity.

In Baghdad there were 3 killed and 2 wounded and Diyala saw 1 death. 2 civilians and 2 members of the Iraqi Security Forces (ISF) lost their lives and 2 ISF were injured.

All four of the incidents in Baghdad took place in the Tarmiya district in the north. That included an IED being dismantled, another blowing up on some police, and two shootings aimed at the army. Tarmiya is a long time insurgent base.

A suicide bomber was killed during a security sweep and a body was found shot in Diyala.

Finally, the Hashd were attacked in Ninewa.

Only the last attack was offensive in nature. The rest were aimed at keeping civilians and the government out of IS areas. This is about all the insurgency is currently capable of.

- "The Popular Mobilization Forces clash with ISIS in Tarmiya, north of Baghdad," 1/3/23

- "The Popular Mobilization repels an attack by ISIS in Al-Hatra Island," 1/1/23

- "A suicide bomber was killed by a military force fire on the outskirts of Hamrin Lake, northeast of Baquba," 1/1/23

Shafaq News, "There were casualties and a police officer was injured in an explosion and a clash with ISIS, north of Baghdad," 1/3/23

Al Sumaria, "A soldier was wounded when he was exposed to ISIS, north of Baghdad," 1/7/23