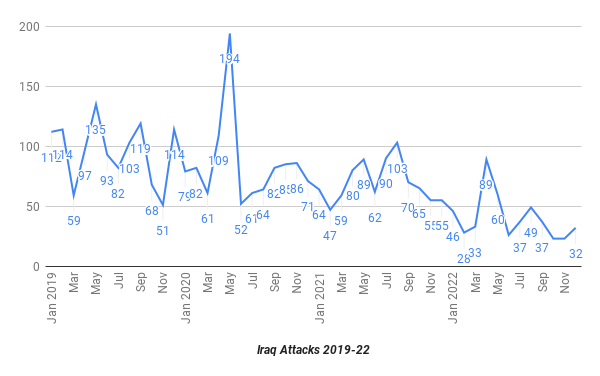 Violence in Iraq slightly increased in December as the Islamic State launched a revenge campaign for the death of its leader. Pro-Iran groups also carried out one attack during the month. Overall attacks remained at an all-time low however.

In December there were a total of 33 security incidents reported in the media. That compared to 23 in November, 28 in October and 41 in September. 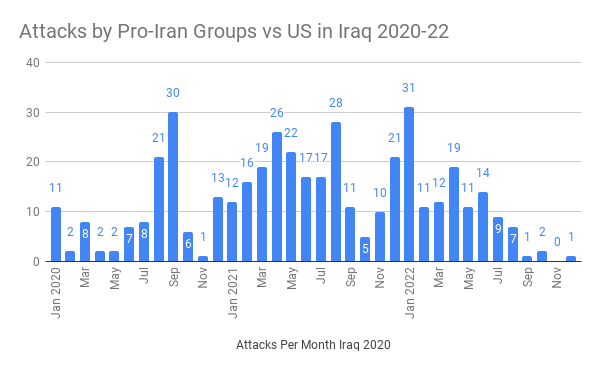 1 of the incidents in December was done by a pro-Iran group which fired rockets at a Turkish military base in northern Ninewa at the start of the month. This is a common target as these factions complain about the foreign presence in their country. At the same time these groups are barely active anymore as they are more focused upon running the new government they helped form.

That left 32 incidents by the Islamic State. That was up from 23 in November and 23 in October. The slight increase was due to the death of the organization’s leader which was announced in December. The group tried to start a campaign to mark his death but it didn’t amount to much because it is so weak right now in Iraq.

They left 42 dead and 38 wounded. 5 Hashd al-Shaabi, 15 civilians and 22 members of the Iraqi Security Forces (ISF) were killed and 9 Hashd, 13 ISF and 16 civilians were injured. Kirkuk had the most casualties with 24 followed by 17 in Diyala, 14 in Ninewa, and 10 in Baghdad. The other provinces were in single digits.

IS’s revenge campaign was marked by 6 suicide bombers being killed during December. One was killed in Karbala governorate by the Hashd. Not only are suicide bombers a rare occurrence these days as IS has lost its networks but attacks into the south are just as uncommon. The fact that all the bombers were intercepted shows the increased capabilities of the Iraqi security forces.

Out of the 32 incidents only 6 were offensive. That included two villages being attacked in northern Diyala and an attack upon the police in the same province. An army unit was assaulted and rockets were fired at a village in Ninewa while there was another clash with the Hashd in Salahaddin. This was one more sign of the weakness of the insurgency. Even when it tries to pick up its operations in a campaign its barely able to do much and most of its strength is still focused upon keeping the government and civilians out of its base areas.

Al Aalem, “The recent ISIS attacks … experts delve into their causes and compare them to what happened before 2014,” 12/21/22

NINA, "9 federal policemen, including an officer, killed in a terrorist attack west of Kirkuk" 12/18/22

- "The Popular Mobilization repelled an attack by ISIS in Salah Al-Din," 12/6/22

- "A security source: The Iraqi army repelled an ISIS attack southeast of Mosul," 12/4/22

Shafaq News, "Behbehani attack in Karbala .. The injury ends the life of a member of the Popular Mobilization Forces," 12/6/22