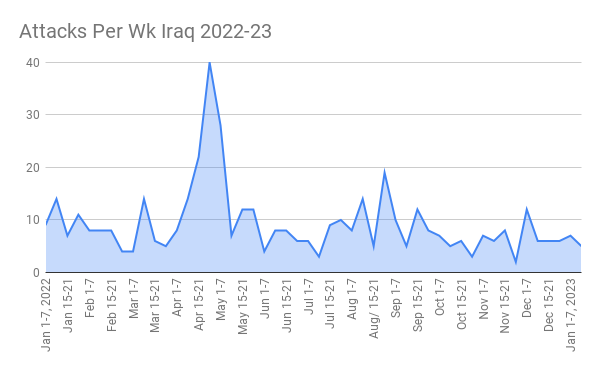 Iraq was relatively quiet for another week. Security incidents were in single digits once again the second week of January while a pro-Iran group carried out a rare attack.

From January 8-14 there were 6 security incidents reported in Iraq. That compared to 7 the week before.

Pro-Iran groups fired rockets at the Kor Mor gas field in Sulaymaniya. This facility has been targeted since the end of 2022. Originally this was part of a pressure campaign by the Coordination Framework to warn the Patriotic Union of Kurdistan to stick with it during government negotiations. The reason for this attack is unclear.

That left 5 incidents by the Islamic State. 33 of the 48 weeks of 2022 saw incidents in single digits and this trend has continued into 2023.

They caused 5 deaths and 2 wounded. 1 member of the Iraqi Security Forces (ISF), 2 civilians and 2 Hashd al-Shaabi lost their lives and another 2 Hashd were wounded. 3 casualties took place in Diyala and 4 in Salahaddin.

In Diyala it was announced that two people who had been kidnapped back in 2021 were executed. A member of the ISF was also killed by a sniper at a checkpoint. Both of these took place in the Muqdadiya district in the center of the province.

2 IEDs were dismantled in western Ninewa and a Hashd unit was attacked in Salahaddin which led to 2 Hashd being killed and 2 wounded. The latter was the only offensive operation by the insurgency during the week.

NINA, "The Popular Mobilization and the army deal with two explosive devices west of Mosul," 1/10/23

- "The Popular Mobilization ends the "ISIS" attack east of Salah al-Din by defeating the terrorists," 1/9/23

Shafaq News, "ISIS executes two people more than a year and a half after they were kidnapped in Diyala," 1/9/23