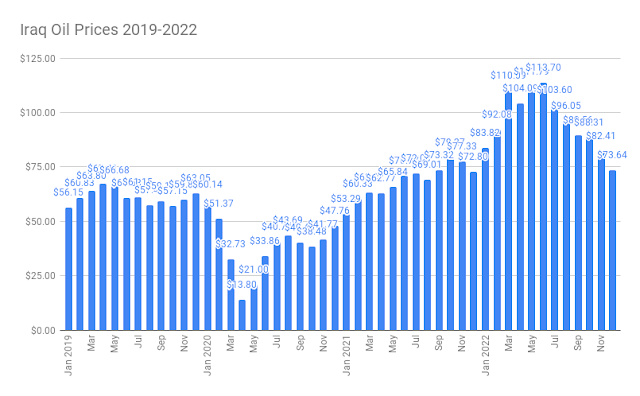 Iraq’s oil prices continue to slide downward as the bubble created by the Russian invasion of Ukraine has ended. That has led to a six month decline in the price for Iraqi crude.

In December 2022 Iraq exported an average of 3.33 million barrels a day. That’s roughly the same amount as November and October. For 2022 Iraq averaged 3.311 million barrels. Iraq has been cutting production to meet its OPEC+ quota but Iraq simply lacks the capacity with its aging infrastructure to sell much more which is the reason why there was little fluctuation in exports throughout last year despite OPEC+ limits fluctuating up and down.

The major change in Iraq’s oil industry was in prices and profits. In December Iraqi oil sold for $73.64 per barrel. That was the lowest price since December 2021. For the last six months prices have been dropping due to the oil market loosening after Russia’s invasion of Ukraine. For the year Iraq averaged $95.76 per barrel.

Revenues have gone down as well. In December Iraq earned $7.6 billion again the lowest since December 2021. Iraq is the most oil dependent country in the world. Its profits cratered during COVID causing a budgetary crisis so Baghdad was happy when the Ukraine war started, prices rose and revenues went over $10 billion a month five months in 2022. That is now over and of course the Iraqi government is not planning for the decline which will likely lead to more financial problems in the future.